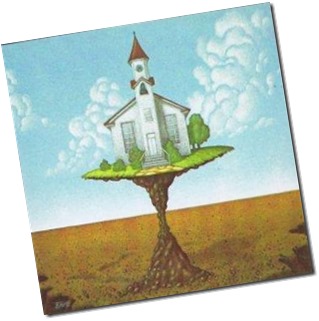 In the national life of our country, the prevailing Christian thought is that of Protestantism while the Anabaptist have sought out safety, security, and isolation from persecution. Consequently, since the 1920’s general societal shift to liberalism, we are today left with the collapses of Christianity. What we now see is an image of a building with a steeple all white with a cross attached to it precariously perched on a slender pedestal of sand with the ground all eroded from underneath, leaving only a thin shaft as support. Our image is of a manmade organization, where men and women sit satisfied and complacent in the land of the free. This has happened within the lifetime of some who may even be reading this letter, a short 99 years.

Of course, the problem started a long time before 1920 but the ’20s were characterized by two important things: one, the scientific technology explosion; and two, a breakdown of morality. Our culture has been frittered away, dismantled, and then re-assembled as something entirely different than what it was. America, now having crossed the threshold of a new millennium prides itself on its new freedom. This freedom is not the freedom based on the foundation of truth before 1920 (generally speaking) but rather a freedom that has no bases whatsoever; it is freedom in the absolute sense, glorified by the media, entertainment industry, and immersed in the perversion of immorality. This new freedom is a deliberate and unashamed attack against God and His moral standards.

Could this slide into immorality have been contained? Maybe or maybe not. One thing is for sure, those who were entrusted with the message of true freedom and service to God, the Anabaptist, have failed. Their failure is understandable from a human standpoint. Unlike the Protestants, the Anabaptist “anticipated a long and grievous conflict between the church and the world. Neither did they anticipate the time when the church would rule the world (as do many Protestants); the church would always be a suffering church” until they came to America, that is. “The Anabaptist vision was not a detailed blueprint for the reconstruction of human society, but the Brethren did believe that Jesus intended that the kingdom of God should be set up in the midst of earth, here and now, and this they proposed to do forthwith.” With their eventual coming to America, after long years of suffering, they apparently were inclined to feel that they had arrived at their destination, mission completed, and welcomed the freedom to just live and let live, and the vision seemed to fade away. They did not set out to present this “kingdom of God” in the midst of their new national home but rather went to the outer reaches of the land to live in isolation from the people. Their missions (other than the Amish who do not try to win converts) were mostly to other countries where we can assume that they felt the freedom to speak without suffering the consequences of a divisive message on their home turf and chance rekindling the fires of persecution.

As a result, the Protestant message, which in most respects lack true and deep conversion, is the message that is governing Christianity in America, and it has also failed. Would the Anabaptist message of non-resistance to the evil person and non-conformity to the world have prolonged this decay that is so prevalent within and without the commercial Church? That is a question that is now past answering; there is no turning the tide of degeneration at this late date; the die has been cast. The only thing that is left is a radical outcry from within the Anabaptist camp to a crumbling Christian order and a declaration that, “We shall not believe, they (the Anabaptist) said, that the Sermon on the Mount or any other vision that He (Jesus) had is only a heavenly vision meant but to keep His followers in tension until the last great day, but we shall practice what He taught, believing that where He walked we can by His grace follow in His steps.” After attending the Anabaptist Identity Conference and the Anabaptist Church Planting Conference I am not convinced that they are doing that, as did the early Anabaptist, venturing into Protestant strongholds with a clear message to stir an old giant from his long slumber. If the Anabaptist will not do it then the Lord will raise-up another Conrad Grebel, Felix Mannz, and Michael Sattler to do the work that must be done. There are many seekers waiting for such a leader, time will tell, but time is short.

4 replies on “Where We Are At Today”

Steve,
As I’ve probably written before, it seems to me that all movements of God die out (or become apostate) within three generations of their founders. The Anabaptist movement had enough diversity in terms of leaders and subgroups to survive beyond that point, but perhaps that is a result of their emphasis on separation from the world? I hope that the church planting efforts lead to something fruitful, but I suspect that you are right about God needing to raise up another Conrad Grebel…

Unfortunately, you are correct. The best we can do is to stall the inevitable and throw ourselves into the gap. You are also correct that their separation contributed to their longevity, but we are to be “In the world.” The world, i.e. the people of the world, is the mission field and not the backside of America where their Anabaptist culture grows undisturbed and unchallenged by reality. We must take the chance that corruption will affect us otherwise we are just a seed on a windowsill. The seed must be placed into the soil where its death will enrich the living. Some seed will be lost, but the chance must be taken and let God do His work. Conrad and company were good seed. I sense, that a great movement is about to burst onto the scene in America and that sorting of sheep and goats will result.

I’m at a loss. The best I could do is make a sign that says, “Jesus Saves, Repent Come out of Babylon”. I stood on the street with it. People looked at me like I was an idiot. Nobody showed any interest. A couple of snide comments. I was outside planned parenthood on abortion day. I got a visit from the FBI. Somebody said I was intimidating people. That’s it. Well I don’t care I think I’ll go back. The few other pro life people are concerned about baby killing but have no such concern about patriotic christian genocide in Yemen. Go figure.

If the best you can do is hold a sign then, by all means, hold a sign. I have a certain respect for those who venture onto the street to do evangelism but my respect stops short when they do not absorb the public response with non-retaliation. I doubt that we will win many arguments or converts with loud angry speech, but a kind and gentle response to their anger can turn even a hardened worldling to understand something that he wasn’t prepared for. After this deadly weekend, I suspect that the FBI and others will be looking a little harder at sign holders outside abortion clinics, so be sure they see peace and safety and not hate and violence.

Keep up the good work brother