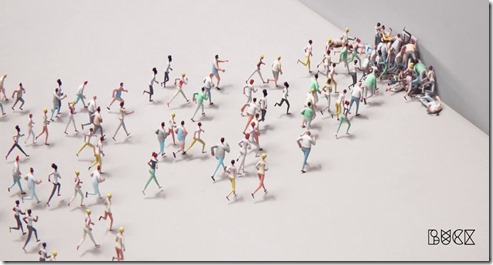 The warnings are clear to our young people against going to dens of iniquity, even out of curiosity, because no one knows what might happen. And, just as terrible, however, is the danger of going along with the crowd. In truth, there is no place where a human being is more easily corrupted – than in a crowd.

Even though every one of these individuals may possess the truth when he gets together in a crowd the truth will be diminished instantly, because the crowd is the essence of untruth. It either produces selfishness, stubbornness, and irresponsibility or it weakens the individual’s alertness and responsibility by placing the person as just one among many. For example, imagine an individual walking up to Christ and spitting on him. No human being would ever have the courage or the audacity to do that. But as part of a crowd, they somehow gain the “courage” to do it. Or, imagine a person deliberately pointing a gun at another person and pulling the trigger. Only the most wicked person could do that. Yet, as part of the crowd, who all possess guns, the crime is diminished and even applauded.

The crowd spirit is indeed the essence untruth. Christ was crucified because he would have nothing to do with the crowd (even though he addressed himself to all). He did not want to form a new political party, a special interest group, a mass movement, but only wanted to be what he was, the truth, which is related, not to a crowd, but to the single individual. Therefore, everyone who will genuinely acknowledge and serve the truth is by that very fact a martyr. To win a crowd is no great feat; to do that only salesmanship, untruth, nonsense, and a knowledge of human appetite is needed. But no witness to the truth will dare get involved with the crowd.

His work is to be involved with all people, if possible, but always individually, speaking with people on the sidewalk and on the streets – in order to split apart and to separate them from the lie, the crowd. He avoids the crowd, especially when it is treated as authoritative in matters of the truth like on an internet blog. He avoids the crowd with its herd mentality just as a decent young girl would avoid bars and nightclubs. Those who speak endearingly to the crowd, desiring its approval, those who submissively bow before it must be regarded as being no better than prostitutes. They are instruments of untruth.

For this reason, I could weep, even want to leave this place, when I think about how the public, with its daily press, internet, and anonymity, make things so insane. That an anonymous person, by means of the press, day in and day out can say whatever he wants to say, what he would likely never have the courage to say face-to-face as an individual to another individual, and can get a crowd to repeat it, is nothing less than a crime – and no one takes responsibility! What untruth! Such is the way of a gang and a mob and such is the way of the crowd.

3 replies on “The Crowd”

Profound, Steve. And how deceptive this all is. Was it not the crowd that wanted to make Jesus “king” in John 6:15? Yet “Jesus withdrew again to the mountain b Himself alone”…

It is all part of the outwardness of our nature to want to please the crowd whereas the spirit draws us inward toward aloneness. It is there that we discover that we are nothing and that God is our all. The paradox of Christianity that so few Christians even know exist, they think it is all about the outward man even though they hear that message preached from ministers who themselves lack understanding.