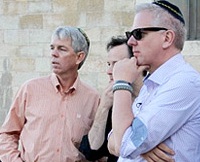 This is a very important event. Americans, and the world have had their heads buried in the sand for way too long, and it is people like David Barton who have turned that sort of thing into a national past time. The old saying, "Ignorance is bliss" has never been more true than today. Politics and religion are the two areas where ignorance is the most blissful. Well a little of this bliss has been has been interrupted with a refreshing case of conscientiousness; let's just hope it is a trend.

Following is a transcript of an article written by Warren Throckmorton detailing the events of the beginning of David Barton's demise. Also, below is the audio link of Chris Pinto's Noise of Thunder radio show talking about this same event, up to 8:30 mark. Wake-up people, time is running out.

“When David Barton said it doesn’t matter whether you are a Mormon or a Baptist or a Methodist, we felt we had to do something,” Featherston explained.

On the Tuesday program, Barton played audio of Glenn Beck saying that “the Lord Jesus Christ is my Savior and my Redeemer.” Then Barton said he believed that Beck was a Christian based on his statement of belief and “his fruits,” meaning his good deeds. Based on Beck’s statements, Barton then asked co-host Rick Green, “Glenn says he’s Mormon. Ok, that’s fine. Based on what you heard, if you heard a Baptist say that or if you heard a Methodist say that…what would you say?” After Green answered that Beck’s testimony indicated a real conversion, Barton responded, “Why is it not a real conversion because of the label he wears?”

Featherston added that the station received many calls during the broadcast with callers who objected to Barton’s views. All but two callers supported the decision of the station to drop the show.

Some callers also complained that Barton misuses history and “takes facts out of context” to create a false impression about the Constitution and founding of the nation, according to Featherston.

Featherston said the station did not take the action lightly, saying “I like a lot of what Barton has to say, but we don’t want to confuse listeners into thinking that Mormon doctrine and Christianity are the same.”

Scott Krus wrote to say that KBJS-FM is an affiliate of the Moody Network but not one of the 36 stations owned by Moody. Mr. Krus added that Wallbuilders Live is not carried by the Moody Network.

Am late to the news (just found your blog), but had been praying about this! Thank you Jesus! and thank you Indywatchman for sharing it. God bless you.

Way to go, KBJS!  Do you think they would've still dropped Barton if they hadn't received so many phone calls?  I wonder…  Surely a rare sight to behold would be for a Christian to take a stand <i>even</i> in the face of unpopularity (notice I refrained from using the word <i>persecution</i>…we don't know the meaning).
Hope you and yours are doing well, Steve.

I think you may be right; they probably would not have ventured out on that limb without the proper motivation. What that motivation was we can’t say, but we can rejoice in the results. We do know that they agreed with Barton on other matters pertaining to Wall Builders. We are a vain and wretched generation and almost always dress our selfish motives in righteous garb. I think that unadulterated righteousness would follow-up this show of conscience with an explanation of how they ever made it this far; but that is only me. At this point, I am struck with amazement that they would make even make this little concession toward Christ. Even a dying fire can can produce signs of life if a breeze passes by.

Thanks for inquiring about our family; they are all fine. My oldest daughter, husband and grand-kids are living with us for awhile. They sold their home and are kind of between tents at the moment, but all is well otherwise.