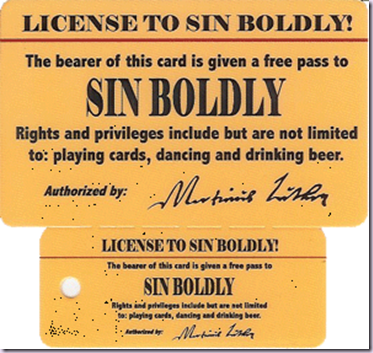 Man is justified by grace, that we all know, and that is not the issue here. But, the issue is that there are errors in the thinking of conventional Christianity, by conventional Christianity I mean that which is recognized in the Church as the highest spiritual example, the standard for everything else. Today’s Christians, in their effort to be contemporaneous or present in the world, exhibit, and even justify the world just as it is. I have addressed three ways but there may be more.

Their starting point is correct; Jesus Christ is Lord of the world. What Christian can deny it? From this truth is extracted conventional conclusions which are all wrong.

First, the assumption that the works performed by man are synonymous with the works accepted by God and are valid and are expressions of His will, is wrong. If therefore, Jesus is Lord of all creation, they reason, He is likewise Lord of all actions, right? If we act positively toward our actions in the world then even the world itself becomes positive and not contrary to God. In a world which is positive, in a world which the Christian can explain to those who are unconsciously “the makers of history,” to the degree of which these works are worthy, valid, and full of meaning, they are embraced by the Lordship of Jesus Christ. Christian man Christianizes the works of secular man but, we must ask, does secular man have a Christian work to do?

They further conclude that man can, and should, bear witness to this fact by taking part in politics by voting and political action, by being involved in advanced technology and science, in economics, and not ask any questions about what is right and what is wrong, or what is permissible. These people do not bother with the question of whether this or that endeavor is satanic in origin but only care that they now have “liberty” in Christ because Satan has been defeated. Whatever is positive and constructive for the betterment of society and the world, they conclude, is a Christ-centered activity. “Where sin increased grace abounded all the more.”

The world is a violent power in revolt against God. The knowledge that Jesus is Lord of all creation does not refute the fact that the works performed by men are expressions of their own wills. Satan was not lying when he offered to turn over the dominion of this world to Jesus if He would only bow to him. He continues to exercise legitimate authority over all political power and Jesus does not dispute the claim. Men continually agree with Satan so that they too can realize dominion over their own little piece of the world.

A second error, comes from the idea that Christ is also Lord of history and guides all the outcomes. The confusion is a misunderstanding of the Lordship of Jesus and His plan for man as opposed to man’s plan of creating an ideal scientific and economical paradise on earth. Nevertheless, the Bible is plain and clear that the history of man ends in judgment. The continuity between Heaven and man’s fabricated and inconsistent history does not exist and his history will be consumed in flames.

The only things that survive the infernal heat are the works of faith for Christ, all else is unworthy. We need to understand that the Spirit presents to us an order within chaos just as there is a new man born within each of us. With this knowledge, we dare not presume or suppose that this “new man” is pure and not influenced by our old nature. Through the works of faith, we can suppress our “old man” but given half an inch that old nature will try and re-establish its dominance. We can only fully belong to the Kingdom of Heaven, while in this world if, like a grain of mustard seed or a treasure hidden in a field, unseen, we clearly and purposely cling to it with unyielding faith. The acceptance of this new order of things must be deliberate and intentional. There is no such thing as an “implicit faith” as taught by the Catholics and others.

Thirdly, an error exposing how the Church justifies the world is in the area of separation and non-conformity to the world. This error comes down to the understanding of the “No” and “Yes” of the Gospel. Christ walked on this earth flawlessly yet God pronounced over Him the “No” of judgment and death and the “Yes” of the resurrection and glorification, and likewise, these pronouncements are made over every man and his works. Throughout Reformation Christian literature we find as a matter-of-fact that the emphasis falls almost entirely on the “Yes” of the resurrection life. Since the “Yes” follows the “No” and that the “Yes” is the focus of our hope and relates to the Gospel of hope then of necessity, it is presumed that the “Yes” cancels out the “No” of death, and this part of the Gospel is ignored. Just as the Ante-Nicene Christians spoke primarily of the “No” of dying to self and the world so today’s Protestants hobble along on the other foot of “Yes” to the world.

Of course, “all of the promises of God are yes and amen” in Christ, but Paul does not hesitate to point out that death is a prerequisite, and a continual prerequisite, for the sanctified and approved Christian life. It is not correct to quote “death has been swallowed up” and to live as if there is no present death to be endured. There is a “continual” maintenance of death, of the “No,” to be contended with. Just as repentance is a form of death and that we must be renewed in our life, we find our flesh under judgment and we recognize the necessity to be constantly crucified with Christ. The “No” and the “Yes” are continually with us till we die.

The “Yes” of God does not cancel out the “No” as is so common to find in the writing of Protestants. The selfish works of modern Christians are under the continual judgment of “No” and death, and it is real death. When Jesus cried out “My God why?” those were words that every Christian will experience as the flesh is deprived of the air and life of this world. Saying “No” to the flesh is real, serious, and terrible.

This “No” is one part of the conversation we have with God, the other part is the “Yes” of a resurrected life. There is so much that is included in the “No” that it demands its own time and space but let it be said here that we must “die to our desires” that are constantly under the assault of the flesh and the world. The Gospel cannot be proclaimed or understood without including, absolutely, the “No” which is also, itself, the Gospel.

The universal problem today, especially within the Protestant strongholds, is that something other than the Gospel is being preached! The Church is giving the people what they want and not what they need. It is as if men were not fundamentally and essentially sinners. This has given rise to a gross misunderstanding of the Gospel that is only now becoming very apparent to many.

The world has been justified by the Church, and man has come to expect that the Church should tell him that he is right and that “Jesus has faith in man.” That being the case, man can go back to his own work and act as he wants! Even when Presidents turn to the Church it is to have preachers tell them what fine and superb people they are and how their works enjoy the approval and blessings of God.

The modern Church has become justifiers of men’s work and to make them appear right before God. There was a time when we laughed at the Catholic Church with their shallow blessings of any undertaking by men: wars, games, road trips, financial ventures, science, and politics. Now the “Protest-ant” Church has come full circle and justifies men in their innovations and the Church blesses and sanctifies their works.

Christians are called to be “in the world, but not of the world.” If your fellowship or Church is not “No” and “Yes” then it is probably justifying the world; it may be time to leave.

4 replies on “How the Church Justifies the World”

Steve, Your follow-up comment makes me think of an irony that exists within Evangelicalism. We’re taught (explicitly or implicitly) to hate Pharisees because they were hypocrites. Yet, most Evangelicals take pride in the fact that they believe certain doctrines without actually living them out (that would be “works righteousness”!). So why did Jesus reject the Pharisees only to establish a church that glories in its hypocrisy? In what way does that create a people whose “righteousness exceeds that of the Pharisees”? We’ve been taught that God’s grace is for the purpose of allowing hypocrites to go to heaven when they die rather than giving them the power to overcome sin (“For sin shall not have dominion over you, because you are not under law but under grace” – Romans 6:14).

Those are truthful words. I just got off the phone with my sister who is a long time member of the United Methodist Church. She asked me what my understanding of the Coronavirus is so I reminded her of some end-time lessons from the Bible but she didn’t allow me to get too far before realizing she had asked the wrong question and cut me off. Her Church is not preaching anything about end times and only considers this kind of talk as scare tactics. Paul says they have been bewitched; that is the only way to understand such gross ignorance. Their righteousness in no way exceeds the righteousness of the Pharisees, but many Baptist are no better.

God, give us the grace to overcome sin and to endure the day.

“But Jesus on His part did not entrust Himself to them, because He knew all people and needed no one to bear witness about man, for He knew what was in an” (John 2:24-25 ESV). Very interesting title and article, Steve. Although most Christians seem to know that we supposed to be “in the world but not of it”, everyone has a different spin on what that means. If we could believe what the Bible says about the coming judgment of this world, there might be less justification of it by Christians…

With Coronavirus plague raising its ugly head quasi-Christians may now begin to see that judgment is near. Regardless of the plague, the Church is tempted to continue the same old attitude of justifying the world and we are its witnesses and are responsible for speaking out. Yes, they are in the world and the problem is that the world is also in them, therefore, they are blinded. The Church continues today only because it stays alive by living on half-truths. It is bound by tradition and jealously guards the Bible with their proud moralism while scorning a full one-half of what it says between those pages. The world is the most terrible threat we face; it offers us spoiled food to eat and some of it finds its way into our bodies and even in the throes of death we must speak out. We are all in the world and we are all tempted and speaking out keeps the truth ever before our eyes.