Does the world watch television? Who cares, they are the world; they do what the world does, and it is all repulsive to God. But, Christians, they are no different. To give up their television would be simply Hell on earth. They will not give it up because they cannot give it up; it is an addiction worse then any that has come before it; it is an addiction that has addicted the whole world; it is the great slough of which the whole world is stuck; and for so called Christians, it is an adulterous relationship that cannot be broken. I firmly believe that at least half of professing Christians will be caught worshiping at the shrine of Hollywood when they get word that the Bridegroom is coming, and will make a mad dash to fill their lamps with oil, only to discover they have been rejected.

Spurgeon has a few words to say about entertainment. Continue reading below, if you dare.

Charles Haddon (C.H.) Spurgeon was born, June 19, 1834 and died, January 31, 1892. He was a Baptist preacher who remains highly influential among Christians of different denominations today and he is still widely known as the “Prince of Preachers.” Bear in mind that there was no televisions while Spurgeon lived, otherwise he would have had even harsher words to say. 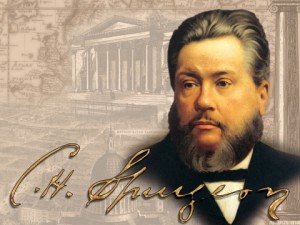 An evil is in the 'professed' camp of the Lord, so gross in its impudence, that the most shortsighted Christian can hardly fail to notice it. During the past few years this evil has developed at an alarming rate. It has worked like leaven until the whole lump ferments!

The devil has seldom done a more clever thing, than hinting to the Church that part of their mission is to provide entertainment for the people, with a view to winning them. From speaking out the gospel, the Church has gradually toned down her testimony, then winked at and excused the frivolities of the day. Then she tolerated them in her borders. Now she has adopted them under the plea of reaching the masses!

My first contention is that providing amusement for the people is nowhere spoken of in the Scriptures as a function of the Church. If it is a Christian work why did not Christ speak of it? 'Go into all the world and preach the gospel to every creature, and provide amusement for those who do not relish the gospel'.

No such words, however, are to be found. It did not seem to occur to Him. Where do entertainers come in? The Holy Spirit is silent concerning them. Were the prophets persecuted because they amused the people, or because they confronted them? The 'concert' has no martyr roll.

Again, providing amusement is in direct antagonism to the teaching and life of Christ and all His apostles. What was the attitude of the apostolic Church to the world? "You are the salt of the world", not the sugar candy; something the world will spit out, not swallow.

Had Jesus introduced more of the bright and pleasant elements into His teaching, He would have been more popular. When "many of His disciples turned back and no longer followed Him," I do not hear Him say, 'Run after these people, Peter, and tell them we will have a different style of service tomorrow; something short and attractive with little preaching. We will have a pleasant evening for the people. Tell them they will be sure to enjoy it! Be quick, Peter, we must get the people somehow!'

No! Jesus pitied sinners, sighed and wept over them, but never sought to amuse them!

In vain will the epistles be searched to find any trace of the 'gospel of amusement'. Their message is, "Therefore, come out from them and separate yourselves from them… Don't touch their filthy things…" Anything approaching amusement is conspicuous by its absence. They had boundless confidence in the gospel and employed no other weapon.

After Peter and John were locked up for preaching, the Church had a prayer meeting, but they did not pray, 'Lord, grant unto your servants that by a wise and discriminating use of innocent recreation we may show these people how happy we are'.

No! They did not cease from preaching Christ. They had no time for arranging entertainments. Scattered by persecution they went everywhere preaching the gospel. They turned the world upside down; that is the only difference from today's church.

Lastly, amusement fails to effect the end desired. Let the heavy laden who found peace through the concert not keep silent! Let the drunkard to whom the dramatic entertainment had been God's link in the chain of their conversion, stand up! There are none to answer! The mission of amusement produces no converts!

The need of the hour for today's ministry is earnest spirituality joined with Biblical doctrine, so understood and felt, that it sets men on fire.

Lord, clear the Church of all the rot and rubbish the devil has imposed on her, and bring us back to apostolic methods!

What is the source of this Spurgeon article?

I can not locate the exact place I discovered the quote but Google was able to find one location, http://faithbiblechurchnh.org/spurg_new_mission.htm