Many "churches" love to quote Tozer,  to attach to themselves, his radical message and nature. Although Tozer preached hard against the Church wedded to the world he remained a part of the organized church to his dying days. This fact has did much to dilute his forcefulness and diminish his authority for the preservation of the true Body of Christ in these last days; but nevertheless, the Lord has used him greatly. Many in the organized church have stopped short in their understanding of his earnestness and desire to regain a chaste relationship with the Lord because he never separated himself from its corruption. Consequently, the organization continues to quote Tozer, feeling they have attained to the same level of disgust. 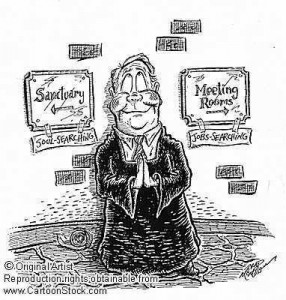 When God gave to Moses the blueprint of the Tabernacle He was careful to include every detail; then, lest Moses should get the notion that he could improve on the original plan, God warned him solemnly, “And look that thou make them after their pattern, which was shown thee in the mount.” God, not Moses, was the architect. To decide the plan was the prerogative of the Deity. No one dare alter it so much as a hairbreadth.

The New Testament Church also is built after a Pattern. “Let every man take heed how he buildeth.” Not the doctrines only but the methods are divinely given. The doctrines are expressly stated in so many words. Some of the methods followed by the early New Testament Church had been given by direct command; others were used by God’s specific approval, having obviously been commanded the apostles by the Spirit. The point is that when the New Testament canon was closed the blueprint for the age was complete. God has added nothing since that time.

From God’s revealed plan we depart at our peril. Every departure has two consequences, the immediate and the remote. The immediate touches the individual and those close to him; the remote extends into the future to unknown times, and may expand so far as to influence for evil the whole Church of God on earth.

The temptation to introduce “new” things into the work of God has always been too strong for some people to resist. The Church has suffered untold injury at the hands of well intentioned but misguided persons who have felt that they know more about running God’s work than Christ and His apostles did. A solid train of box cars would not suffice to haul away the religious truck which has been brought into the service of the Church with the hope of improving on the original pattern. These things have been, one and all, positive hindrances to the progress of the Truth, and have so altered the divinely-planned structure that the apostles, were they to return to earth today, would scarcely recognize the misshapen thing which has resulted.

Our Lord while on earth cleansed the Temple, and periodic cleansings have been necessary in the Church of God throughout the centuries. Every generation is sure to have its ambitious amateur to come up with some shiny gadget which he proceeds to urge upon the priests before the altar. That the Scriptures do not justify its existence does not seem to bother him at all. It is brought in anyway and presented in the very name of Orthodoxy. Soon it is identified in the minds of the Christian public with all that is good and holy. Then, of course, to attack the gadget is to attack the Truth itself. This is an old familiar technique so often and so long practiced by the devotees of error that I marvel how the children of God can be taken in by it.

We of the evangelical faith are in the rather awkward position of criticizing  Roman Catholicism for its weight of unscriptural impedimenta and at the same time tolerating in our own churches a world of religious fribble as bad as holy water or the elevated host. Heresy of worldly method may be as deadly as heresy of message. Old-line Protestantism has long ago been smothered to death by extra-scriptural rubbish. Unless we of those who call themselves gospel churches wake up soon we shall most surely die by the same means.

New methods have now been invented for imparting spiritual knowledge; or, to be more accurate, not new at all, but an adaptation of gadgets of some years standing, which by their origin and background belong not to the Church but to the world. Some within the fold of the Church have thrown their mantle over them, have “blessed them with a text” and are now trying to show them to be “the very gift of God for our day.” But, however eloquent the sales talk, it is unauthorized addition nevertheless, and was never a part of “the Pattern shown us on the Mount.”