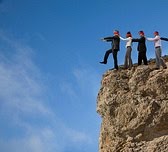 Brian McLaren takes issue with the critics of Rob Bell. But, Brian recognizes that Rob is pushing the envelope with his not so disguised stand for universalism that he makes in his new book, Love Wins. Why else would Brian be “anticipating the baptism in hot water (or worse) that Rob Bell was about to experience with the publication Love Wins,” unless he recognizes Rob’s vulnerable and precarious stance?

As Rob Bell’s comrade in arms, attempting to solace his friend’s suffering, by breaking the silence and coming out in his defense, Brian is not content to just let it lay, and hopefully go away. As a vested friend, Brian adds a little oil to the already slippery slopes of Rob’s creative liberal theology, by offering this flimsy critique of Albert Mohler’s claim that Rob has no right to determine his own story or manufacture his own gospel.

Brian, in his critique, will try to convince us that, “communication is nearly always tricky.” What I take this to mean is that, communication is tricky when you are trying to get someone to do, or believe, something that is contrary to their present frame of mind. But, is our normal everyday communication really tricky? No! The tricky part comes into play when we try to fly under the radar of truth, by insinuating certain things into the conversation, trying to draw a persons thinking onto another path. To say things plainly is not difficult with wives or children, unless we are attempting to be manipulative. Our children will purposely not understand us if discipline has been missing. They understand very well the real message being communicated.

On the contrary, it is deception that makes things tricky. We saw Rob Bell’s opportunity to speak plainly in his interview with Martin Bashir of MSNBC on this You Tube video  where Rob is constantly being “tricky.” Rob never did answer his questions plainly. The ruse failed, but Martin’s interview was a success; by not answering the questions, the answers came through loud and clear. Rob came across as a trickster. Yes, if you are trying to formulate a lie things can get tricky, as we all know and can relate to, but speaking plainly is not that difficult.

Here is the difference between Rob Bell, Brian McLaren, and Albert Mohler; Albert is speaking plainly. Was what he said hard to understand? Nothing tricky that I could find. I think everyone knows exactly where Albert Mohler stands, and I’m sure Martin Bashir would not have had as much fun with Albert as he did with Rob. Now, Albert may be mistaken in some areas, but the point is that he was clear in what he said; no flimflam.

On the other hand, who knows what Rob Bell believes? With all the verbal gymnastics he uses, he sounds more like a politician than someone who lays claim to truth. We know perfectly well when we have made ourselves hard to understand. We know when we have tried to color our story to make it appear to be something it is not. The bottom line is that we know when we have intentionally muddied the waters to achieve some hidden agenda. We can always blame it on, “the biases, fears, hopes, politics, vocabulary, and other characteristics of the receiver or the receiver's community.” Creating confusion is one of the hallmarks of the Emerging heresy.

Brian says Rob Bell has been misunderstood, as always occurred in the old pass the message around the room game. This could possibly happen if all we had were the sketchy second hand accounts of Rob, whispered in an ear and then passed on verbally, but that is not the case; we have Rob Bell’s own original words, in writing, in audio, and in video. What’s to misunderstand? There is no “static” in the line as Brian complains.

If the truth of the Scriptures have been changed over time, as Brian claims, it has happened primarily through deception of one sort or the other. We have many accurate translations of Scriptures and none agree with Rob Bell or Brian McLaren, so this is more subterfuge.

Brian doesn’t make any distinction between an interpretation of the Bible, and liberal Form Criticism, adaptation, or abridged version of the Bible, which starts with the premise that the sources cannot be trusted.  There is a whole “world” of difference between them. A translation is a written communication in a second language having the same meaning as the written communication in a first language. To faithfully interpret the Bible, is the act or process of explaining or elucidation, or to bring out the meaning of all the words and stories found therein, this is known as exegesis, (to bring out.) To redact or adapt the Bible would be to do as Rob Bell and Brian have done. It is to edit out or retell according to ones own liking, by introducing culture onto Scripture, then suggest the correct understanding. The “original story” which Brian and Rob say they are “bound to” does not exist, and is a fabrication from Brian and Rob’s imagination and generous creative orthodoxy.

Brian give an example for us here,

“Rob is suggesting that Jesus' original story (as he interprets it) is better than the version many hold and proclaim today. He's making a distinction – nuanced to some, obvious to others – between the actual original gospel and the imperfect versions or approximations of it that any of us proclaim. He wants to be bound to that original story rather than to a popular (perhaps the most popular in some settings) version of it.”

“The actual original Gospel,” is nothing like what Rob presents to us in Love Wins.

Brian goes on to state that belief and trust in the Bible as written is “excessive confidence.” Really?

“That excessive confidence hides behind a popular saying: "The Bible says it, I believe it, and that settles it." To many ears, the saying sounds admirable. But wouldn't the saying be a bit more honest, and a bit less admirable, if we phrased it like this: "The Bible says something which I interpret in a certain way, and I believe that interpretation, and that settles it"?”

With one swipe of his pen, or keyboard, Brian has just turned the truth into a lie of Satanic proportions. “A bit more honest”? Doesn't this sound very similar to, "hath God really said"? This is ludicrous!! I’m almost beginning to feel sorry for Rob.

Brian gets it wrong again. What Brian is saying, in Rob’s defense, is that he rejects the truth of Scripture, and turns it into silly putty. Once you have gotten to this point anything can emerge, and it does.

“Many of us are concerned about the traditional doctrine of hell for reasons of justice and holiness, not mere sentimentality. Even putting God's loving nature aside for a moment, it's very hard to square the idea of eternal conscious torment with a just or holy God, especially when Jesus repeatedly encourages us to trust God as a just and holy father.”

Well, he should be concerned about God’s justice, as well as his own repentance.

Redacting “hell” out of the Bible will not do. Brian and Rob get rid of “hell” so that they can have a God they can believe in and live with. There are many Christian Scientist who don’t believe in sickness or death, which is the ultimate sickness, but they die all the same, even their founder, Mary Baker Edy, dead. So, it doesn’t matter what we believe, what matters is the truth. The truth is, just as the Book of Truth, the Bible says, hell is for real. It is not contingent upon Brian’s or Rob’s concerns, or whether or not they understand “justice and holiness,” or whether they can “square the idea of eternal conscious torment with a just or holy God,” it simply is not going to go away. If we do not understand something about the Sovereign God of the universe we should go to Him and ask for wisdom, who will give to every man according to their faith. What Brian does not understand is that God’s love and His justice cannot be separated, because they are the same, they are who God is, loving and just.

6 Then he told this parable: "A man (God) had a fig tree, planted in his vineyard, and he went to look for fruit on it, but did not find any. 7 So he said to the man (Jesus) who took care of the vineyard, 'For three years now I've been coming to look for fruit on this fig tree and haven't found any. Cut it down! Why should it use up the soil?'

8 "'Sir,' the man replied, 'leave it alone for one more year, and I'll dig around it and fertilize it. 9 If it bears fruit next year, fine! If not, then cut it down.'"

In these verses we see both the love, (mercy) and justice of God. Many people ask why a good God would allow so many to die in tragic disasters as we have seen lately. Jesus’ answer to His inquirers was simple, “But unless you repent, you too will all perish.” These men ask the wrong questions, as do Brian and Rob. Their question should be, why does a just and holy God allow any of us to live; we all deserve to perish. In verse 6-8 Jesus balances the justice of God with His love in a simple parable. God’s justice demands “fruit,” but through patient love for His Son (the Keeper of the vineyard) He displays His mercy and puts a hold on justice, and makes allowances to give time for repentance and fruit bearing.

Rob Bell and Brian McLaren are doing themselves no good, if they are at all interested in the future. Their conversations and convolutions make no sense in the light of the Bible, and in the light of Truth, and do much harm to their followers; remember Korah Numbers 15:1-50.

There is no need to continue here with Brian’s criticisms.

God has made His word plain; it is simple to understand for anyone seeking the truth.

We have been warned to beware of these wolves, and my warning cannot be made any clearer than God’s own warning,

Beware of false prophets, which come to you in sheep's clothing, but inwardly they are ravening wolves. Ye shall know them by their fruits. Do men gather grapes of thorns, or figs of thistles? Even so every good tree bringeth forth good fruit; but a corrupt tree bringeth forth evil fruit. A good tree cannot bring forth evil fruit, neither can a corrupt tree bring forth good fruit. Every tree that bringeth not forth good fruit is hewn down, and cast into the fire. Wherefore by their fruits ye shall know them. Not every one that saith unto me, Lord, Lord, shall enter into the kingdom of heaven; but he that doeth the will of my Father which is in heaven. (Matt. 7:15-21)