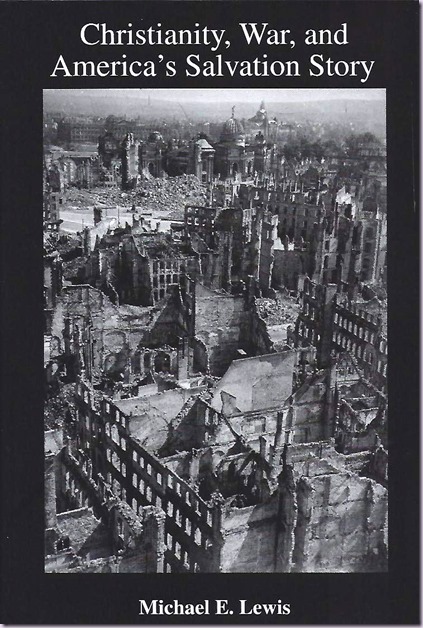 I just finished a great book, Christianity, War and America’s Salvation Story by Michael E. Lewis. The book can be purchased at Sermon on the Mount Publishing in print or PDF format.

The greater part of Christendom lives in denial of what Jesus came to accomplish during His time here and that denial is lived out in the life of the institutional Church. Michael sets forth his case, presents his argument with undeniable documented facts, and closes with words directly from the mouth of the guilty along with the testimony of the pilgrim Church of the first three hundred years. Any Christian who can read Christianity, War and America’s Salvation Story, and come away still believing the bloody myth of Manifest Destiny and Patriotism, that has been spoon-fed to the American public for centuries, does so at the risk of their own redemption. If you are still hooked on the false narrative of Christian America you owe it to yourself, family, friends, and for the sake of truth, to read this book.

“What of Jesus and His apparent defeat at the cross? In truth, no greater victory could ever be won or been more desperately needed by the creation, and yet it was secured by death on a cross; no armies, no outward demonstrations of worldly power, no pomp or glorious triumph. Jesus looked nothing like a king in victory as He died on the cross. It looked like foolishness to man, but it was God’s wisdom and power on display, with the Father, the Son, and the Holy Spirit in triumph.”

“What looks like defeat and weakness to the world is the very picture of strength, the very power of God over the principalities and powers.”

Hi Steve. Sounds like an interesting read. And of course you would agree that America’s salvation story goes beyond even the atrocities of war. The “rich, young ruler” is a highly sought-after speaker at most Christian conferences, as we all want what he has managed to get (along with God’s blessing to boot!). The enemy of our souls has indeed convinced us that down is up, and so we go…

Oh yes, you are so correct. Michael takes almost 600 pages and destroys the accepted Protestant narrative that all of Christendom has swallowed. I have to admit that I was in that camp at one time. It was so easy to believe and resonated perfectly with Christian society. I wonder now at the gross blindness. The health and wealth message, especially in America, is the other side of the coin. Is there any hope for Christianity these days? Those who have refused to drink the kool-aid are becoming a very rare breed, especially in the cities.