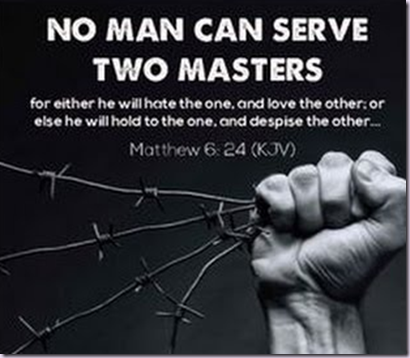 This is a re-post of an article I wrote before the election in 2016.

I get a lot of feedback on not voting and non-participation in government, and I love it; I love it because someone may be enlightened. Probably the most common question I get is, “If we as a nation did not have good people to lead and at least try to govern this nation, where would we be?”

The answer is simple, but the thing we must remember is that I am not, nor is the New Testament, speaking about people in general when the statement is made to separate ourselves from the world, (and governments are of the world are they not?), it is speaking of those who have been “born again” into the Kingdom of God, followers of the Lamb. Those born again individuals now have a different country, a different King, and a different constitution, to which they have sworn their allegiance. God’s command to his Kingdom citizens is to

“Trust in the Lord with all your heart and lean not unto your own understanding and He will direct your path,”

not a constitution written by mere men for the benefit of mere men.

God has instituted worldly governments of mere men to keep order and to prevent wholesale anarchy by the people of the world; this government is to be run by non-Christians, this includes the government of the United States. Unfortunately, Christians have been tricked into thinking that they have to get their people into all the different areas of government to create some sort of Heaven-on-earth. They didn’t get this idea from the New Testament, but by leaning on their “own understanding” and logic and not trusting in the Lord with all their hearts, as they were commanded. The fact is they cannot trust the Lord this far and they feel like they must take control of the situation. This is not faith it is rebellion and is unacceptable to God, and will not be recognized as the trust required to follow the Lamb. What they don’t understand is that it is THEY who are the problem, just as Israel was the problem and brought judgment on themselves, and that it is they who will bring the wrath of God on their nation by their rebellious evils.

At the root of the problem is the fear of being destroyed by their enemies. “What is our purpose if not to protect ourselves and our families?” “Voting helps to ensure the survival of our nation.” “Survival is only human instinct.”

Survival may be the first law of human nature I will admit, but it is only made that way by life apart from God and by an out-of-focus view of man’s true purpose. The need for survival comes from the defective logic of Adam. Survival is not a law regarding the spiritual man. Christians and politics are 180º out of sync with the teachings of Christ, and the Christian leader who promotes this lie is a false-teacher causing many to stumble.

When Christians vote they in essence thumb their noses at the sovereignty of God’s power and ability like the Israelites did when they demanded a king rule over them. The Christ-life does not make sense to the flesh and its defective logic. The flesh cries out, SURVIVE, but Christ says “do not count the flesh as anything,” it is in opposition to Christ (Romans 7) and will lead you astray. Our purpose as Christians is NOT to survive, it is to be obedient in all things; Christ says “follow me.” It is the mystery of the Kingdom; we must die to live. “Unless a seed of corn falls to the ground and dies it remains alone, but if it dies it multiplies . . . .”

“Who will separate us from the love of Christ? Will tribulation, or distress, or persecution, or famine, or nakedness, or peril, or sword? Just as it is written, ‘FOR YOUR SAKE WE ARE BEING PUT TO DEATH ALL DAY LONG; WE WERE CONSIDERED AS SHEEP TO BE SLAUGHTERED.’ But in all these things we overwhelmingly conquer through Him who loved us.…” Rom 8:35-37

“But for Your sake, we are killed all day long; We are considered as sheep to be slaughtered.” Ps. 44:22

Taking sides in politics is taking a side against Christ, and we all know who will win that battle.

There is no need for fear.

3 replies on “A Biblical View Of Political Involvement”

The spirit of this age has infected Christians on both sides of the political spectrum, but sadly, we only tend to see which tenets of our party are “more Biblical”. But when the beast is done with harlot, he will turn on her as well…

This issue was addressed by Anton Bosch in an online conference organised by a friend, Deborah Menelaws and I; see:

Excellent post 1 I wrote something similar in December 2019. You picked up some good points I missed.