This is an article by my friend and regular contributor to this blog, Glenn Christopherson. Glenn has a clear understanding of the problems of the age in which we live. I pray that you will take the time to read and think about what Glenn is saying. Comment if you like, but don't just lay this article aside as just another complaint about commercial Christianity. Read the article and try to prove him wrong. I believe that with that effort, any Spirit led believer entrenched in organized Christianity, will encounter a major roadblock to their common or traditional approach to "doing Church." 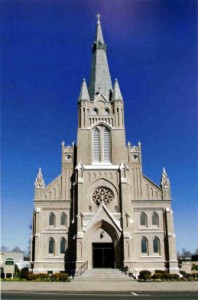 What Would Jesus Build?

97.3 percent of statistics are wrong. Including that one.

But assuming the stats are accurate, it is possible to come to entirely wrong conclusions from raw statistical data.

I’ve just read an article that proves that true.

Some one decided to do a in-depth study on what Christians do with their money.

I have a problem with that to start with. It seems to show an unhealthy interest in mammon to me but his conclusions really boggled my mind.

Apparently Christians world-wide spend less than two percent on gospel related activities. I don’t know how that information was gathered. No one asked me what I give…and if they did I would lovingly tell them to mind their own business. And I don’t know if they visited the underground church in China or Iran with their clip board of polling questions. But lets assume the stats are reasonably accurate.

According to the author of the article, Christians world-wide give 370 billion dollars to gospel related activities. Of that, 97 percent goes to salaries and building related expenses. Of the remaining 3 percent a small proportion, 1 percent of the 3 percent (are you following me so far?) goes to financing missionary activities in relatively gospel ignorant areas.

The conclusion that the author comes to is quite remarkable.

Christians need to give more.

Here’s how I see it. The vast majority of Christian giving is being wasted on things that are not promoting the gospel.

Remember the “What Would Jesus Do” campaign. I always had a little trouble with that because with every situation Jesus would see with absolute clarity what was required, He would speak a word of infinite wisdom and then quite likely do a miracle. As for me I’m still working on my infinite wisdom and miracle working power but the question “What Would Jesus Build’ is far easier to answer.

It is noteworthy that Jesus was trained as a carpenter, which meant he was a skilled builder and yet His ministry exhibited a distinct lack of building programmes and He never preached for the building offering.

In fact he was such a skilled builder that He constructed a kingdom out of two planks of wood.

There are those today who bemoan the loss of the grandeur of the old cathedrals. One commentator I read recently stated that since we stopped building cathedrals the work of God has gone backwards. I replied to him that many of the horrors of the inquisition happened in beautiful cathedrals.

I have no problem with buildings per ce, they keep the rain off your head etc, but if anyone actually believes that building magnificent and expensive structures furthers the gospel, they’ve missed the essential truth that the temple today, the contemporary House of God that Jesus is building is built from the living stones of blood-bought people.

I once went to a meeting in a beautiful stone and stained glass building. My 5 year old son looked around at the crowd of a dozen or so people and then looked at the stones built into the walls that commemorated saints long since gone to their reward. He leaned over and whispered,”Dad, there’s more dead people here than alive” Out of the mouths of babes.

Many a magnificent cathedral is filled with more dead than living.

A magnificent temple filled with the presence of God. A house of prayer for all nations. A priesthood of revelation-empowered and Spirit-filled ministers of the Most High God. What Jesus is building puts angels in awe. Some speak of the reverence they feel in the loud silence experienced in the ancient structures of worship. But the glory of God indwells a different structure. And history has proved the genius of God’s strategy. Brick and stone can erode and collapse under the weight of time and tyrant, but nothing can destroy the temple God is building. It’s eternal and only increases in glory as time passes. The church of the Living God. If you have been born again by the Spirit of God, whether you realise it or not, you are an integral part of this temple.

This temple is built with a sure and unshakeable foundation. The foundation of the Apostles and prophets and King Jesus Himself the capstone that holds it all together.

The true Church may sometimes meet in buildings but their power and significance comes from the divine Architect.

It has struck me when reading church history how often the people of God have had their greatest hour when released from the prison of their buildings through persecution or poverty.

I watched a documentary recently that showed the birth of revival in Uganda. When Idi Amin’s thugs began to attack the church they would burst into the buildings and murder and drag off the assembled worshippers. The result: they began to meet in the forests and cry out to God with a new sense of their desperate need for Him to move on their behalf. And move He did. Multitudes came to Christ. Small groups of intercessors with a preacher would go into an area and within a week six faithful saints would be joined by thousands of brand new converts. Wouldn’t you love to see that? No programmes, no wasted effort on monuments to mens ability, just the power of God working through the word of God building the temple of God.

Buildings are not evil. The disciples met in an upper room, Paul hired a hall at one point in his missionary trips. The early church in Jerusalem often attended the synagogue to preach Christ. They were usually expelled (some things never change) No, buildings are not evil but at best they are irrelevant and at worst a waste of time effort and money. Wherever even two gather in His name, He shows up whether in cathedral or park, behind stained glass or in a lounge room.

For those who are of the opinion that we should honour God with the best that we can build, God has a word

Heaven is My throne and earth My footstool. Where is the house you will build Me? And where is the place of My rest?

For all these things My hand has made and all those things exist” says the LORD. ” But on this one will I look: On him who is poor and of a contrite spirit, and who trembles at my word”

A little more trembling and a little less building may be the need of the hour.