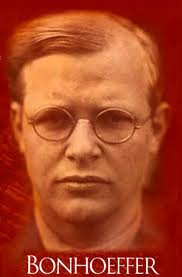 Dietrich Bonhoeffer, 1930's, Germany, Switzerland, Spain, England, and the United States……
On Grace, the Cross, Our Cross, and Life Together
"Cheap grace is the preaching of forgiveness without requiring repentance, baptism without church discipline, Communion without confession, absolution without personal confession.
"Cheap grace is grace without discipleship, grace without the cross, grace without Jesus Christ, living and incarnate.
"Costly grace, Biblical grace, is the treasure hidden in the field; for the sake of it a man will gladly go and sell all that he has. It is the pearl of great price to buy which the merchant will sell all his goods. It is the kingly rule of Christ, for whose sake a man will pluck out the eye which causes him to stumble. It is the call of Jesus Christ at which the disciple leaves his nets and follows him."
-Dietrich Bonhoeffer
"Bonhoeffer knew that twisting the Truth to sell it more effectively was inexcusable. For Bonhoeffer the challenge was to present the Truth as purely as possible without attempting to help it along or dress it up."
-Eric Metaxas, Biographer
"Bonhoeffer's church is a sect [a cult], in fact the worst sect to have ever set foot on the soil of German Protestantism "

7 replies on “On Grace, the Cross, Our Cross, and Life Together”

» On Grace, the Cross, Our Cross, and Life Together – IndyWatchman

And a lovely peek!  What a blessing to read.  Thanks, Steve.

Thanks, Steve. Good to know – I'll start with the first title.

Sounds like it was a great day.  What would a family portrait be without our beloved pets?  They bring us tremendous joy…(except for that horrid mess this morning;  I seriously wondered why we ever got them in the first place).  Thankfully, that thought quickly passed.

It was a great day. The weather here in central Indiana was about 58. My three daughters, who all live within a quarter mile, brought there dogs: two young German Shepherds, a Chocolate Lab, also young, a little yapper (don’t know what it is, but it is very territorial) and our Australian Shepherd. We dared not bring the cats, that would have been too much. They all get along good, except the yapper, he’s the oldest and it was at his house that the invasion took place. The photographer was challenged, to say the least. My oldest daughter wanted a non-traditional portrait, so she moved a lot of her antique furniture, old picture frames, a large mirror, rugs, etc., into here yard (we live in the country) with the trees and lots of fallen leaves, everyone dressed in earth tones and kids hanging from limbs; it was a production, but that is the way my daughter does things. It was fun, but tiring; then we ate and played ping-pong and planned our fishing trips for the Spring; some watched football, I think the Patriots beat our Colts.

Mondays are our regular family day at our place. My wife prepares a meal and the girls and the kids all arrive about noon. The day is spent sharing, shopping, studying the Word and Home schooling, music lessons, planning. I usually get home early on these days and the other guys come in as soon as work allows. It doesn’t always work out perfect, but we have managed to keep it going for about five years now. Bonhoeffer’s “Life Together” has helped us stay on track, along with many others sources.

This is a little peek into our life. With the time getting short, keeping family close and safe is important. Monitoring every aspect of our life is critical, the enemy is out there waiting for the perimeter to weaken and the wall to fall. We can never stop fighting and watching, and waiting.

I have yet to read any of Bonhoeffer's works, yet have admired his many quotes over the years.  I think I'll just have to go for it and stay put one cold and rainy weekend to start and finish one of them.  Perhaps I could start with "Life Together" since those particular quotes are poignantly profound (can you say that real fast 3 times? 😉 )

One book I read more than a year ago falls within this category of the Church's compromise during the Nazi era called "Day of No Return".  It's a true story of a seminary student in Berlin who joined forces with Niemoller (the other man who, like Bonhoeffer, had the guts to stand against the false religion of the Nazis).  It really is a fascinating insight as to how Hitler was able to work through the churches and bend them to his will.   I first learned of it through Berit Kjos' ministry – they quoted from it extensively.  Definitely worth one's time, since we may very well face a similar situation in the near future.

Many thanks and take care, Steve.
Happy Thanksgiving to you and yours!

Nice to hear from you again.

Bonhoeffer is well worth the effort to read and ponder, because , like you say, we may well see a replay in our own country. I cannot endorse all of his theology. The Emerging church claims him for their own, but I think they may have misread him on a few things: his attending a liberal university and his preaching on social justice. But, his story includes a rejecting of liberal theology for Barth’s more conservative dialectical theology. Anyway; Bonhoeffer’s “The Cost Of Discipleship” should be on every Christians bookshelf, because it throughly illustrates the “cost” that is involved in the claim of being a Christian, and he does more than preach a good sermon; he lived what he believed.

Our family celebrated an early Thanksgiving today and had a photographer come and take some great family pictures. The weather was great and the pictures were taken outside, and they included all our pets; it was a lot of fun.

Have a wonderful Thanksgiving,

Bonhoeffer’s “Life Together” is a good fast read, but not his best work. Our family has used a lot of what he writes in that book for the basis of our gatherings, but we stay away from anything concrete so as to give free rein to the Holy Spirit to guide us, but it is worth the reading.