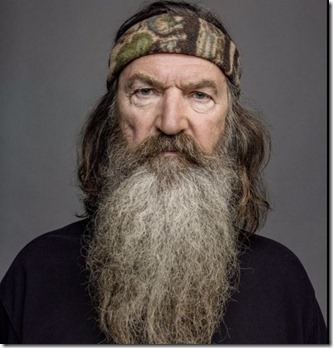 Does Phil Robertson speak for the whole nation?

Phil says he is a Christian, but he cannot say he is following Jesus. At the 3:40 marker Phil says, what Christ would never say, “Convert them or kill them.” Would Jesus say that? NO! This is not the Good News, it is another Gospel, the gospel of death, no different than those who he stands against.

Not only does Phil speak for the majority of Americans he speaks for most Christians in America. The real question should be, – does Phil speak for Jesus? The answer is NO he does not, because Jesus would never prescribe the solution Phil so proudly proclaims. Phil’s solution is the same solution that ISIS proclaims – convert or die.

Recruiting offices are going to be busy. The ire of the American patriot has been aroused, and it will be the Christian patriot who will be first in line to take up the sword that Christ told Peter to “Put away.”

Is it really possible that a Christian can turn his back so easily on Jesus, who he claims to follow, and listen to the clamor of hate and vengeance? Yes it is possible, because this is the message coming from the pulpits of America. The message of Phil Robertson encourages the hate that enflames the hearts of carnal Christians across this land, who can’t wait to – do unto them what they have done unto us, and the Church follows.

I do not believe there is such a thing as a Christian military man. Christianity and the military represent two different kingdoms, and one of those kingdoms is of this world; can you guess which one? You cannot simultaneously believe that Jesus was The Prince of Peace and the Lamb of God while imagining Him blowing His enemies brains out or decapitating him.

There is no such thing as a Christian patriot, it is an oxymoron. If you are a patriot then you hate Christ and His message, to love, feed, clothe, pray, and die for your enemy. You can’t have it both ways, you must make a choice: follow the world and Phil, or follow Jesus. Your weapons will either be a sword, gun, knife, tank, and bombs, or they will be spiritual. No spiritual weapon has ever yet decapitated and killed its enemy.

We are, without doubt, living in the last days, because the – Church – is in full blown apostasy, as Paul predicted it would be before the Lord’s return, and the Lord’s name is being mocked because of Christians and the Church.

When the Phil Robertson/Sean Hannity video goes viral declaring in Christ’s name that we kill Muslims if they don’t convert, what does that say about the state of the Church?

Go ahead and kill your enemies, just don’t claim to be a follower of Jesus when you do it.

I for one will have no part in this insanity. This is not Christianity, this is rebellion against Christ.

The Christian patriot is dedicated to the kingdom of which he (or she) is a citizen, and to its King, Jesus the Anointed One of God.
The Christian’s first and only allegiance is to his (or her) King. The Christian submits to the kingdom of this world that holds hegemony over the spot where he sojourns not because it has any inherent jurisdiction over him but because the Constitution of the Christian’s Word of God, the Bible, so instructs.
The Christian has better things to occupy his time and effort than fighting with the servants of the darknesss

Yes, Steve, this is distressing. “And because lawlessness will increase, the love of many will grow cold” (Matthew 24:12).