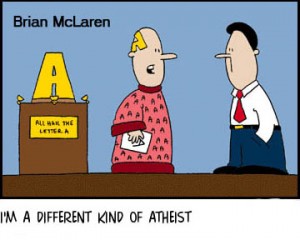 How horrible it will be for you when everyone says nice things about you. That’s the way their ancestors treated the false prophets. Luke 6:26

This is yet another sign of the apostasy of Brian McLaren. In this piece on Brian’s site, he praises an atheist for saying nice things about him, who thinks Brian is the epitome of Christian faith.

Why would an atheist praise Brian McLaren? Well, the answer is easy enough, because Brian is essentially saying the same thing as the atheist, and their goals line up. Atheist and heretics are not offended by Brian’s message, they are brothers traveling the same road. They see Brian as moving into their camp bringing presents (the young and foolish).

The early Church dealt with a similar problem. The religions of the ancient Roman world were all accepted as equally tolerable and equally valuable, and to a large number equally vain, to the Roman people. All the gods were worshiped, and the bond of unity was maintained because every god reigned with equal favor and benefits. It was the Jews first, then the Christians, who violated this universe of unity, by declaring absolutely that there was no other God, but God.

Why were the ancient Christians persecuted?

Christ has nothing to do with those who don’t believe in Him, they are the world. Next Brian will be telling us that unbelievers are pleasing to God; Oh! beg my pardon, he already says that.

And it is impossible to please God without faith. Anyone who wants to come to him must believe that God exists and that he rewards those who sincerely seek him. Hebrews 11:6

Brian McLaren has defected from Christ and Christianity, while still wearing the uniform and using the language (although with new definitions), and is one of the new Judas Zealots now trying to use Christ to their own advantage. This is the reason that he is  pleased to now add to his ranks, an atheist. It matters not that they represent two different worlds and systems, it only matter that he accomplish “his” goals, of unification of all beliefs, government reform, and selling a few books.