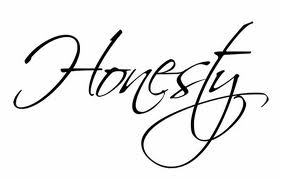 I am not a doctor, philosopher, or psychologist, but I have discovered a few things about honesty that I would like to share with you.

Honesty, as a Christian spiritual virtue is nearly non-existent today. Hear me out and I think you will agree.

Honesty has several different facets. When we generally think of honesty we mostly consider it to be an outward act toward other people, whose opposite is displayed in acts of lying, cheating, or stealing. This aspect of honesty, although severely played down through the re-defining of modern morals and ethics, is not what I’m addressing.

Another facet of honesty is the inward element, which I will not address either. It is the mental judgment of the one we see reflected in our mirror. This type of illusionistic honesty is better known as self-deception, or psychological dis-honesty, played out in things like disavowal or aggrandizement.

There is another area where honesty is of utmost importance, and more vital and foundational than the outward or inward types mentioned above. As a matter of spiritual fact, the two named above cannot be understood correctly unless foundational honesty, i.e. spiritual honesty, is practiced.

Behold, you desire truth in the inward parts: and in the hidden part you shall make me to know wisdom. Psalm 51:6

For most of my Christian life I was a dishonest follower of Jesus, which just means that I was not following Jesus at all, only in my mind. After praying, maybe one of the few honest prayers of my life, the Lord answered me. I honestly wanted to follow Jesus, but I didn’t know how, and the answer to my prayer was an unfolding of events in my life, which demanded “honesty” in the inward parts. I was honest in my business dealings, and with my employees, and with the IRS, and with the man-in-the-mirror, but something was wrong. It was around this time that I discovered my dishonesty, how, spiritually, I had allowed deception and dishonesty to govern my life. I had failed to honor God by believing His words; I was a un-believer. The only way for me to discover this dishonesty was through the stern intervention of Father with an adult dose of truth.

The initial lesson in “spiritual honesty” came to me in two, what now seems as obvious, revelations: a giving of sight, and a hearing of the Word.

The first to get my attention was something I already had a surface awareness of and that I had witnessed in the Church, but I did not really “see” it as a manifest display from Almighty God. What I became acutely aware of was that the Church looked and acted like the world. The statistics were all there: divorce, abortion, pornography, drug and alcohol abuse, and perversions of all kinds. The Church was in denial, and I was in denial. I enjoyed my vices, and rested secure in the illusion that I was going to Heaven. I was headed for a crisis of Divine magnitude. The impact of seeing my Christian life against the backdrop of those statistics made me physically ill. Would I continue to live in denial, which demanded that I do nothing, or be honest, which demanded that I die? I choose death. I would learn what that decision meant; the Lord would pick the time and the place, and the sacrifice would be required. That decision was now in God’s hands.

The stench of those statistics began to rise up and gag me. I could not look in the mirror, or at the Church, without seeing an embarrassing hypocrisy: its ministers as agents of compromise, and myself as a very lost soul, in an impossible situation.

The second revelation came as I was listening to an associate pastor give his take on 2 Timothy 3:12 “Yes, and all who desire to live godly in Christ Jesus will suffer persecution.” I had never heard this passage before. I don’t mean that I had never read it before, I had read it many times, but I had never “heard” it before that night. It wasn’t anything the pastor said, he was just reading the words, it was something the Spirit said, and it was loud, and it was clear. What the Spirit said was that I was not living a godly life. How did I know, because I was not being persecuted, that simple. These two things I have come to learn are inseparable. This is the message of Jesus, and the Apostles, and is illustrated in the lives of all those who dared to live godly, Genesis to Revelation. The bottom line is that, if you preach the truth, that truth is going to land you in a position that is opposite to that of the world, and if that truth gets you opposition from the pulpit, then it is indicative of just how far the world has advanced, it really is that simple.

“Woe to you when all men speak well of you, for so did their fathers to the false prophets.”

If the world hate you, you know that it hated me before it hated you. John 15:18

These two seemingly simple tests of the Lord, regarding “honesty,” presented to the Church, have come back with failing grades. There is a lack of truth and honesty in the New Age Commercial Church of the twenty-first century. They do not see that the Church, as an institution, has failed, and this is plain dishonesty, because the failure is too obvious. They fail to recognize the simple truths of Scripture as to the primary personality trait of those who truly desire to live godly lives, and again the failure is obvious.

So, I ask you again, “are today’s Christians honest,” are you honest?

“So justice is driven back,

and righteousness stands at a distance;

truth has stumbled in the streets,

honesty cannot enter. Truth is nowhere to be found,

and whoever shuns evil becomes a prey.”