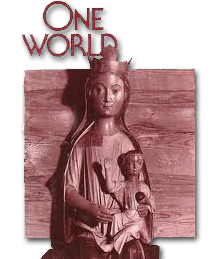 You have recently contacted me and kindly asked me to be involved with your prayer ministry. Part of your letter states that you follow the World Council of Churches (WCC) prayer schedule.

Unfortunately I can not be involved in your group and in fact I must say with respect I am emphatically against what you are doing.

You may be shocked and I need to explain why.

It seems that you may be ignorant of what the World Council of Churches represents and what its agenda is. Let me state upfront that the aims of this organization are diametrically opposed to what the goals of a Biblical Christian should be.

I know you are impressed with the talk of unity and tolerance coming out of the office of the WCC but surely you must be aware in your study of scripture that unbiblical unity (so called) has often been the occasion of God’s chastisement on His people and not His blessing. What some call unity, God calls rebellion. The ecumenical and interfaith emphasis of the WCC expose it not as a faithful organization seeking to further the Kingdom of God but rather a manifestation of the ancient Babylonian quest for globalist power; politically, religiously and economically.

As an official NGO of the United Nations with offices in the UN building in New York you must realise the goals of the WCC reflect the goals of the UN. The UN was birthed in occultism and continues in the same vein, consistently standing against Yahweh’s revealed priorities for Israel, national sovereignty, family and the true church of Christ, as it attempts to build a global government backed by a global religion. But this is certainly not a religion that God recognizes as valid.

A simple internet search of Alice Bailey’s occultic writings and her publishing company originally called “Lucifer Publishing!” (now called Lucis Trust) and her connection to the UN will perhaps open your eyes to the demonic nature of the United Nations and those who are linked with it. While you’re at it research Robert Muller and his pagan mutterings or Maurice Strong and his occultic babblings. Both high profile UN leaders. I know this sounds like something out of a Left Behind novel, but it is tragically true. The WCC has wholeheartedly joined with this pagan monstrosity and is certainly not what any faithful follower of Christ should be involved with.

Incidentally, many church organizations here in Australia are official members of this organization including the Anglicans, The Roman Catholics, the Church of Christ, the Salvation Army and the Uniting Church. These denominations actually pay dues to the WCC. This means that some true believers are in fact helping finance the nefarious schemes of the syncretistic and compromised WCC. Essentially these brethren are financing their enemy!

I encourage you my brother and those connected to your group to not only stop following the WCC’s prayer schedule but to withdraw from your denomination(s) if they are members of the WCC.

These are difficult days in many ways. Deception is rampant, discernment rare and apathy the norm. False teachers abound and compromise has closed the eyes of many. I exhort you brother to consider what I say and more importantly get in to your Bible and consider what God says. You may protest that you were ignorant of the spiritual corruption of the UN and it’s affiliate, the World Council of Churches. Well you can not use that argument any longer. Now you simply need to decide who are you going to serve. The Baal of the United Nations or Yahweh the God of Abraham, Isaac and Jacob. The choice is yours as will be the consequences however you decide.

Stand for Christ brother and shake off the lies of dead and deadly religion.

Pray according to the word, as you are led by the Spirit, and not according to a demonically devised antiChrist agenda.

Hold fast to Christ and warn the brethren of the schemes of the enemy.

If you are able to accept what I say, I will gladly join in prayer with you. Please let me know what you decide.