Man has been separated from God for well nigh seven thousand years and today little thought is given to the idea that maybe what we witness with our eyes and in our thoughts is not normal. Most men and even Christian men will indulge their propensity toward evil. They will watch the theatrics of evil as it spews from the airways then feel righteous when they experience sorrow or grief for the imaginary victims of fake violent scenes on their television sets. They will applaud the violence of sporting events and cringe just a little if real blood is spilled or a bone is broken. With excitement, they will read of the destruction of a supposed enemy either real or fictional and care little that they are really rejoicing with demons in a world that will soon burn. Men have become so accustomed to this fallen world that they have no propensity for another world that is in contradiction to all that he sees and imagines. Mankind has adapted itself to its new home in the Garden of Evil.

On occasions, I will sit and wonder what the Garden of Eden was like and if Heaven will be like that or something else. Thinking of Eden is a pleasant pastime but pastimes give way quickly to reality and the fact that we are no longer in Paradise. We are not in Eden but rather we are in the Garden of Evil.

On that fateful day in Paradise, our parents, Adam and Eve, were cast from the presence of their Father to spend the rest of their days on the wrong side of swirling swords of fire and cherubim guarding against their reentry to The Garden of Eden.

In Eden, life was simple, and everything was at their disposal, and for their good, with only one restriction, “You are free to eat from any tree in the garden; but you must not eat from the tree of the knowledge of good and evil, for when you eat of it you will surely die.” In Eden man instinctively knew what to do, his mind was not clouded by the conflicting knowledge of both good and evil; he knew only good. He was not distracted with all the mental gymnastics that accompany decision making now.  Answers and solutions flowed easily from a mind uninhibited by contrary thought processes and guilt.  All of nature was in sync and operated according to perfect order. It was a time that we can only dream about, the stuff fairy tales are made of. Adam and Eve never spent time considering a better life than what they had; trying to imagine a more perfect perfection doesn’t even make sense. They were perfectly content.

Outside the Garden of Eden is another garden, the Garden of Evil, and it also has a gardener who likewise says, “You can eat from any tree in the garden except the Tree of Life.” “If you eat from the Tree of Life you will die.” The fear of death is the one thing that keeps the Devil’s servant in line. In this kingdom, everything is antithetical, pretentious, and counterfeit. Out here, in the world, there are many horns sounding, and every day more are heard. All of them come with a promise of light and wisdom, showing men the way to god or to become gods. Even as we speak, all of these prognosticators, seers, oracles, soothsayers, esoterics, philosophers, psychologist, prophets, politicians, mystics, kabbalist, sects, denominations, cults, orthodox and unorthodox, are raising high the standard of truth, with voices sounding ever more as one voice, propagating the religion of the world. 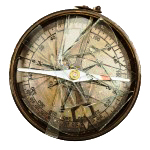 The Bible declares that men are lost! I went wandering off one time in the desert around Superstition Mountain in Arizona. It was a long time ago when my girls were still very young. I pulled the car over to the side of the lonely road and told Marilyn, my wife, that I would be back shortly. So with camera in hand and brain turned off I started taking pictures. When I was finished I turned to go back to the car but to my stark realization I had become “lost.” I didn’t know where I came from, or where I was going. I became acutely aware that this was serious, it was very hot, and for an instant, an adrenaline rush of fear passed over me. Lucky for me Marilyn had the presence of mind to honk the horn and direct me out of danger. That was a great lesson, and the lesson of the Garden is similar. What men have failed to learn from the Garden lesson is that they are very lost, away from Eden and in the Garden of Evil, and they hear horns honking from every direction, and have only succeeded in going deeper, and deeper, into a dangerous wasteland, endlessly trying to reason-out which horn will lead them to safety. Outside Eden we now have this characteristic which is part of our fallen nature called “reason.” Things which we used to know instinctively now demand much thought and reason. It is true, we do now know good and evil, the problem is we don’t know how to tell the difference. Many things that we consider good are in fact evil, and some things which may appear evil to the human mind are in fact good things. We are truly lost! We cannot distinguish our Fathers voice from all the din and dissonance. Every question has a thousand nuances, and every horn sounds like salvation. When I was lost in the desert I had good reason to be afraid, but being lost in the “world” doesn’t appear that bad to people who have come to trust their ability to “reason”. To the lost world, this phenomenon is the new normal and is why much worldly schooling becomes necessary.

How do we find our way back to God? How do we determine good from evil, and truth from error?

At this point, God steps in. In our minds, we would reason that the best thing for God to do would be to just kick the Devil out of the Garden, but the truth is just the opposite; God kicks us out and gives us special instructions on how to distinguish the sound of His “horn,” or voice. Faith, trust, and belief are key components of those instructions.

This is all very simple but has been missed by the majority of people, including Christians. We cannot see the truth because it all seems so illogical to our now impaired reasoning ability. Here is the simple God-logic of the situation: Do not listen to the instructions that come from your faulty navigation system –your mind – it will trick you into faulty conclusions and keep you self-confident, and following the wrong path. Worldly logic is fatal, it is the beginning of a trip into superstition and despair, which will result only in death. What the Bible says throughout is to live a separated life, isolated from all the commotion outside the Garden; from all the efforts of Satan to tempt and trick us into responding to one of the false sounds of deliverance. We must make a decided effort to ignore the sirens and seductresses of this world by closing off all avenues of assault. Not only that, but we are instructed to not even trust our own thinking. I know this all sounds ridiculous, and that is precisely why very few will heed the warnings, and so many will be eternally lost.

As the world continues to rumble, and the seas roar, like a woman in labor, ready to deliver, the events that took place in Eden, and after that, should begin to make more sense. The tree of Life—the Bible–that we are advised by this world to not take literally, is the single clear voice of escape. It foretells of these end-time calamities. The religious and political power structures of Satan’s world have diluted the message to a near meaningless book of verbiage. For anyone still seeking the truth, the message is still absolute, and able to lead any who follow to safety, but the trip is not without perils; the Bible is clear on that point also.

The Son of God, who is the Living Word, is the “Tree of Life.”  When the Word speaks of mixing two types of cloth together, plowing with an ox and an ass, or adding yeast to dough, it is speaking of the peril of adding or mixing anything of the world to the truth of Scripture; this will never work; it is like adding venom to vaccine, as history has proven.

By extension, we can say: If you think you can do something good for the Lord, you are wrong. If you think you can build or plant a “Church” for the Lord, you are wrong. If you think you can live a good life and please the Lord that way, you are wrong. If you think speaking in tongues, or healing the sick, or even reading your Bible will secure you a seat on the Gospel Train, you are wrong. We had life once, inside the Garden of Eden, but now, outside the Garden, the Lord requires one thing, death. Jesus said to follow Him. Where did He go? He went to a hill outside Jerusalem and died, and it is there we are to follow. Dead men do not do anything, they are dead. All our thoughts and good intentions must go; all our aspirations and education, no good; all our lust, desires, and habits along with all of those things, even our devotion to children and spouse, must take their place on the burning altar and be reduced to ashes. Then, and only then, with the faith and belief of Abraham, we know that what we have dedicated to the Lord He is able to rise again from the ashes, to be a vessel for the King’s use, forever, and evermore.

This is part of the lost truth of the Bible, and this is only the beginning. There is so much that we are not hearing from the sounds coming from so many religious buildings, with their CEO’s and Sunday morning speeches, and the horns are earsplitting. We have men trained by men to preach the party-line; ordained by men, commissioned by men, sent by men, to build something for “men.” It sounds very much like the episode of Nimrod and the Tower of Babel.

These are the last hours of the last days, before the Lord’s return, and truth is at a premium. Solomon instructs us to “buy the truth and sell it not.” Jesus instructs us to sell everything we own and buy “the pearl of great price.” They both speak of “truth” as the most valuable possession that a person can own. There are so few of us who really want to know the truth. Don’t satisfy yourselves with concessions.

Christian, don’t let the glitter of this world get in your eyes.

“Many will say to me on that day, ‘Lord, Lord, did we not prophesy in your name, and in your name drive out demons and perform many miracles?’ Then I will tell them plainly, ‘I never knew you. Away from me, you evildoers!”  Matthew 7:22, 23

Steve,
Once again, a profound post that articulates well the problem that all humanity faces: trusting in ourselves (and the world)! And yet, for those who are unable to see it, what more can be said? The scariest thing about deception is that the deceived are blissfully unaware of their true condition…

And yet Jesus said, “my yoke is easy”. Paradox.