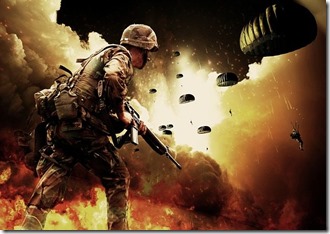 There are no Christian Patriots, a lie that’s everywhere believed,

And as far as enduring suffering, God has closed His ears to thee.

Your faith and life are based upon, a flag and sophistry,

That you display with foolish pride, and think it sets you free.

You have walked into harm’s way, and accepted the national lie,

That guns and bombs and hand grenades,  you can on them rely.

But Truth that is so very meek, you have turned away your eyes,

To tread the shores of distant lands, where prideful men do die.

Why pretend that peace is purchased, with all your deadly weapons,

When Jesus says quite clearly: “Resist not the evil person”?

Our Lord did die and led the way, so there’s no excuse for treason,

Yet you conclude He could not have known, our circumstance or reasons.

This latter-day religion, that has thrown wisdom to the wind,

That trust in arms and missiles, instead of trusting Him.

There is no reconciliation, to those who trust in men,

Who have found security in a motto, and believe the national hymn.

He has told us plainly, and demands obedience today,

Lay down your earthly weapons, and come and die My way,

And trust not in your own might, nor officers made of clay.

Freedom is a free gift, for those who will obey.

Our war is not with those lost men, who Jesus came to save,

Our war is in the heavenlies, against demons in array.

The battle is not ours to win, we fight evil unafraid,

And oppose the Devil and his hordes, in a closet as we pray.

Remember Jesus and His men, who all died forever blessed,

Who put aside all worldly arms, and in Spirit they found rest.

We only have One Master, and to His pierced side we press,

And steer away from Satan’s lie, and cheat eternal death.

2 replies on “The Devil Adores the Christian Soldier”

If only we had this same zeal for the spiritual battle to which we are called (2 Timothy 2:3-4).

Thank you, David. Getting involved with the affairs of this world and its battles takes a lot of continuous prayer and understanding to avoid; it is a deep pit.