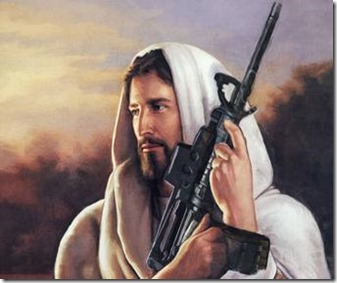 Am I against veterans, no, I am for veterans, I am a veteran, but more important than veterans is TRUTH?

The picture above is preposterous and offensive. Jesus would never own a gun or participate in violence of any kind. Yet, today, hundreds of thousands of Christians in the military have been convinced that Jesus sanctions the taking of lives through violent acts and that it is a sacred act to kill your enemy in self-defense, capital-punishment, or in war. For the first three hundred years of the Church it is very well known that killing of any kind was forbidden by the Savior. Yet, the next eighteen hundred years show a progressive slide in the opposite direction. Today we are left with the majority of Christians believing that killing is okay and approved by the Lord, unbelievable but prophesied; “evil has become good, and good evil.”

To correctly understand this issue we must first ask a question, “how do we acquire our beliefs and worldview?” Nearly everything we believe about life and God is inherited or obtained through personal contact with other people much like a person would catch a cold. Through this contact, humans begin to form and filter their belief systems. For lack of a better term let’s just call this involuntary gathering of information “subliminal learning,” it is the building of a database of ideas that we presuppose to be true about life. A normal growing human person will hold most things to be true or false based on three things, experience, observation, and the environment. Humans, build this knowledge-base on sensory data which they can see, hear, smell, or feel and on secondary familiar information that is shared through parents, siblings, family, country of origin, peers, school, or Church. Our assessment of things like truth, justice, right, wrong, moral, immoral, etc., are not sensory like taste, feel, sight, or hearing, but are rather information acquired or learned like our language and its regional dialect. This can be easily observed in people of different cultures having certain worldviews which are cultural, local, or territorial. All of this is to say that our worldview or presuppositions are accumulated and learned through contact with the world around us and are not necessarily based on absolute facts or truth. Christians, like almost everyone, when presented with a conflicting idea, will very often discard truth for a cherished or popular opinion and force truth to conform to our presuppositions.

Def.: pre·sup·po·si·tion, an unquestioning assumption about the world, sometimes called a worldview, or an unconscious response relating to a statement whose truth you take for granted in a conversation.

So, what does this have to do with Veterans Day?

Christian military men and veterans have drawn false conclusions based on popular notions and presuppose that God is pro-military and pro-war. Once this fact is admitted, It is easy to recognize that a false monolithic worldview plays a huge part in how and what Christians generally believe about the world, even their Christian world. Christian soldiers claim to be “born again” of a spiritual seed and that they are no longer of the world of flesh and blood but of the Spirit; we are “in the world but not of the world.” Through new-birth Christians are made aware of a new second nature and should realize that they wear this body of flesh and blood, with its old corrupt nature, as a remnant of a past life, a vestigial and dangerous appendage (see Rom. 7). Our fleshly body is now a tool and mechanism to be used to infiltrate the world and perform missions of rescue. We are explicitly warned to not trust this old-man of the flesh, which still desires the world, lest we become comfortable, and betray our Commander, and join in the work of evil. Christians are soldiers of the Cross and must remain faithful to their prime directive to seek and to save the lost, even at the cost of their own lives.

Christians have been given a “trust” for the benefit of lost men and swear loyalty to a new Commander in Chief, who underwrites and guarantees that trust. They are cautioned of the dangers of taking their eyes off Christ’s narrow path, lest they suffer with the enemy, his same fate. But, a tragedy has occurred. Christians in the military have allowed the flesh and the world to override and reinterpret their Commander’s orders. They have listened to the voice of human “reason,” which has its source in faulty data which they presupposed to be true; human reason is a blind and confused guide. The Christian soldier has been tricked into listening to the voice of the enemy, a voice from the dark side, and now ignorantly serves the adversary and deny that sacred trust.

Christ has shown us a better way to navigate this deadly minefield behind enemy lines. He has written it all down for us and exemplified it by His life, His Apostle’s lives, and the lives of His faithful disciples for two-thousand years. Yet, we go to the world and enlist in its security forces like those faithless Israelites who wanted to be led by a king. This was not a rejection of the prophets it was a rejection of God and His ways. When the Israelites were told of the cost in resources and family they still demanded something they could see, as opposed to faith, in the unseen God.

Christians celebrating Veteran’s Day is only a symptom of something much, much deeper. “Woe to those who call evil good and good evil, who put darkness for light and light for darkness, who put bitter for sweet and sweet for bitter.”

With so many Christians joining the military I wonder if “truth” is really that important to these men and women? If truth has not led them, then what? Is it the power of pride, patriotic preaching, peers, and popular sentiment that motivate them? Or, is it as simple as base animal cravings for violence and action? Whatever the reason it most certainly is of this world and not of Christ. We must learn that God accepts nothing of the old life! There is only one thing God wants of us, and that is our unconditional surrender to Him; we are His captives. When we are born again, and surrender completes its humiliating business, the Holy Spirit begins to transform His new creation, and there will come a time when there is nothing remaining of the old life. Our old patriotic and gloomy outlook disappears, as does our old attitude toward ways-and-means, and “all things are of God” (2 Corinthians 5:18). How are we going to get a life that has no lust for accolades and honor, no self-interest, and is not sensitive to the suggestions of others? How will we have the type of love that “is kind…is not provoked, and thinks no evil”? (1 Corinthians 13:4-5). The only way is by allowing nothing of the old life to remain, and by having only simple, perfect trust in Christ, our only Commander in Chief.

Freedom Has A Price

Christians should understand very well what their freedom will cost. The men and women who have traveled the Trail of Blood pioneered by those early saints who refused to kill for any reason have now passed the baton to this generation. Those saints understood the price that had to be paid and willingly grasped that baton. Will this generation lay down their worldly weapons long enough to Biblically consider the true cost of freedom and take up the call to “Come and Die”?

This truth needs to be rediscovered and passed-on to future generations – and Veterans Day is a great place to start. The verse below taken in its proper context refers to the non-resistant Christian who is prepared to die for friend or enemy rather than do harm or kill.

This may seem like a harsh indictment against Christians on the Right or on the Left. When Christians join the world in its celebration of evil by laying praises and admiration on those we send to do our dirty work, to secure for us a safe place to play video games, watch T.V., and gorge ourselves on the residue of a lost civilization, we share in that evil and it becomes ours, we own it.

We are no less guilty than those we send,

Or the ones whose lives we go there to end.

One reply on “Should Christians Celebrate Veteran’s Day?”

Steve,
I can’t add anything to what you’ve written. I just wanted to say that it’s always good to another post from you. Grace to you!
David