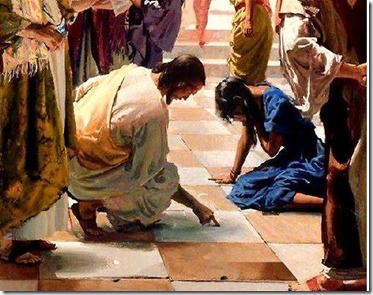 Historians have noticed what Christians have failed to discover and that is the immense compromise that the Church had committed by her alliance with Constantine in the year 314 A.D. at the Synod of Arles. In this canon it was stated that Christians would be threatened with excommunication those Christian soldiers who insisted on quitting the army, which left military service free and open to Christians. This move was in direct opposition to the stance of the Primitive Church of Tertullian, Hippolytus, Origen, Cyprian, and Lactantius who represented the heart and thought of its Founder and Apostles. And so, for the first time, the meek and peaceful Jesus became a God of battle, and the cross, the holy sign of Christian redemption, the banner of a bloody warlord. This irreconcilable incongruity between the symbol of peace and war is verdict enough to convict the left-leaning of the commercial Church.

Christians need not be students of history to discern this truth, it is set forth in the life of Jesus and throughout the pages of the New Testament. One need only have the spirit of knowledge and the discernment of truth, both of which are free gifts of God.

We should not be surprised that we who occupy the Church at the end of the age should find that it has slid into apostasy since this too has been foretold. This evil of strife and killing which have become the mindset of modern Christianity has now become a virtue to be praised and glorified by those who profess godliness and proudly present Christ as their warrant for destruction of human lives.

The day is drawing short and time is of the essence that professing Christians cast off this devilish spirit of patriotism and murder and join the Lamb of peace in preparation for the Groom to receive His bride.

How is leaven apostasy and where are the birds in Matt13?

The word “apostasy” “Apostasia” is a compound of two Greek words: “Apo” = “to move away”, “stasis” means “standing or state”, or “to stand.” Apostasy is to move away from the truth or true religion which is exactly what these parables illustrate. The bird of Matthew 13:31-32 and the leaven of v. 33 are pictures of evil within the bounds of the tree and loaf which represent the Church, i.e. apostasy confined or hidden within the church. Revelation 18:2 With a mighty voice he shouted: “‘Fallen! Fallen is Babylon the Great!’ She has become a dwelling for demons and a haunt for every impure spirit, a haunt for every unclean bird, a haunt for every unclean and detestable animal.

So the leaven which represents groth symbolizes the lies that were added to the Gospel and the birds are the liers who twist the truth?

I always thought that Babylon was the beast system. Washington DC is also a city set on seven hills. The whore is the apostate church Catholic and protestant.

The leaven symbolizes corruption and the birds symbolize evil. No one really knows for sure what or who the whore or Babylon is. Dave Hunt makes a good argument for Rome as Babylon and the Catholic Church as the whore but I have heard other arguments that make some sense. When Christ in Revelation commands His people to come out of “her” He could just as easily be talking about the whole corrupt system of Christianity; the whore has many offsprings. But, I am only speculating, we will find out soon.

Apostasy is what happens when truth is ignored

Steve,
I believe that Jesus, knowing the heart of man (John 2:23-25), was fully aware that Christendom, like Judaism before it, would quickly depart from its Head to form a false body. However, Jesus was willing to “buy the entire field for the sake of the hidden treasure” (Matthew 13:44). Living in these times and in this culture, it is a daily battle to remind myself of these things and not be conformed to this present age…

Thank you for that insight, it is very helpful.

Steve – I’ve been reflecting on the idea that Jesus’ parables about the mustard seed and the woman hiding the leaven (Matt. 13:31-33) are descriptions of apostasy. Where man is in charge, the result is always corruption…

These verses have left me scratching my head. I have read respected scholars who adamantly declare that this pictured the growth of the Church after Christ. I have never accepted that view and consequently reserved comment. I never once regarded it as apostasy, but that makes more sense than anything else. Birds and leaven are not generally pictured in Scripture as something good, and that is what confused me. But, if it is looked at as apostasy then the dots connect.

Thank you.
Steve B.