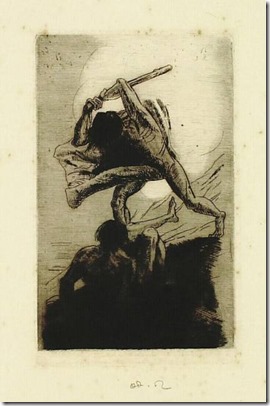 There is a characteristic of this church age that can only be classified as a new theology, but has its true origin in the brother of Abel. It cannot be denied that all we see today – the death of God, the elevation of the love of humanity over faith in God, the separation of truth from reality, violence as a distinctive of God, psychologizing as a cure for the ills of man, and religiosity as a means to an end – were all formulated and revealed eons ago by Cain. All of the modern findings are again calling into question God’s plan for man and His revelation of truth, leaving man absolute and in-charge.

It is not a stretch to see that the world’s effort to modify the Bible so that it can better communicate with modern man is no new endeavor. Even before science, we find it being practiced with the same spirit and for the same reasons, to elevate man’s “reason” above the will of God. Examples of this spirit are scattered throughout history and legitimized and Christianized and accepted in place of the Gospel. New theological affirmations are always the renewed protest by man against God’s sovereignty. Cain’s desire for concessions from God to accept his approach is nothing but the root of modern theology in all of its varied forms.

In the narrative of Cain and Abel, we see that Cain is irritated by what appears to be God’s arbitrary choice of Abel, and this is not at all satisfactory with Cain. This action of God was not a rejection of Cain but rather an opportunity for Cain to make a choice; the word of God is always a Gospel, a good word. The command put on Cain is the same command put on all of God’s children, to get mastery over sin.

At this command, we can sense a pause as if Cain was weighing his options, and he says nothing to God. This silence, we can conclude, is a rejection of the vertical relationship with his Creator and the only relationship which remains is the man-to-man horizontal relationship of which his ability to either out-wit or destroy his brother become viable options. This breaking of the vertical relationship is Cain’s new form of freedom, a freedom to now use all the resources of this world and the inner reasoning of a corrupted mind. In his use of “reason,” along with his new found freedom, he falsely concludes that the God of Abel has victimized him and is unjust and that He would have to be banned. And, from that time on he knew Abel would have to die; Abel stood as the proof (in his own mind) that he was despised and rejected by God. The only person he now had to satisfy was himself. It is significant to recognize that this justification turns in the same circle that the death of God, the science of man, the theology of violence, the study of mental awareness and astrology are expounded and developed.

This new study or knowledge has been lately termed as a, “coming of age.” Appeals to a primitive deity as a Father is hedged around and prayed to on the level of esoteric and occultic apparatuses to expand personal abilities and awareness. Mankind is now writing his own story and history. Cain has now reached his summit and formulated his own religion by rejecting outright or supplementing what remains of past revelatory knowledge, which the Bible exposes as an illusion. In Cain’s mind, he believes he can now lead history in a positive way and provide and assure, by his own means, what God had proposed, i.e. to protect him. We have now arrived at man’s efficacy for self-protection, self-awareness, self-fulfillment, etc. with not only receiving God’s promise to avenge Cain “seven times” if he is attacked but of Lemach’s success in avenging himself “seventy-seven” times. His vengeance is much better, much more efficacious than God’s, and here man’s enterprise and self-sufficiency blooms and takes shape. What purpose is there now for a direct appeal to God in a society where man is successful without God? Of course, God did provide some good ideas initially, which needed only a few enhancements to adapt to Cain’s present situation. Cain is now a modern theologian.

Many are quite aware (maybe unconsciously) of this theology of Cain becoming “of age” and applaud it as a great advancement in thinking and in reality, it is nothing but the applaud of the fall of Adam. In this sense, the fall of Adam was a positive thing and thanks to it man has won his freedom and great initiative.

This places us in a very comfortable situation. We can proclaim that we are in an altogether different situation now with the advent of adulthood. Modernity, secularism, rationality, science, etc., is a situation worlds apart from Biblical myth. As a consequence, we find it necessary to extricate ourselves from the old formulas and theologies so that we can communicate man-to-man as adults. The comfort of this position has promoted our blindness and disability, and disallows any communication with an unseen reality and it is in this regard that Solomon declares, “Vanity of vanities . . . there is nothing new under the sun.”

3 replies on “Cain, The Spirit of the Modern Gospel”

The last organized church I attended had joined the Willow Creek Association nearly 25 years ago and relied heavily upon their programs and resources. Although warned about the seeker-friendly agenda, the leadership ignored the red flags because the WCA approach produced the desired results. Fast forward to the recent unmasking of Bill Hybels, and how do these leaders respond? “Well, let’s not host the Leadership Summit this year and let things blow over. Once there’s a new elder board at Willow, we’ll be back in business.” The blindness and delusion are alarming, and the frog in the pot has long since boiled…

“Woe to them, for they have gone the way of Cain… who was of the evil one and slew his brother… because his deeds were evil…” (taken from Jude and 1 John 3). To the religious (and well-respected) Jews of His day Jesus said, “You are of your father the devil, and your will is to do your father’s desires…” (John 8:44). The blindness of these people to the truth persists today, for the “god of this world has blinded their minds…” (2 Cor. 4:4). Good connections, Steve – keep proclaiming the truth, though there be few that find the narrow gate…

I read and pray and witness my Christian friends caught in the systems and mechanisms of this world being chewed alive and consumed whole. Only Christians can open up the way to freedom from the world yet, they are of all men the least free. But, there are some; I know I am not alone, who are experiencing my sickness. I know the Lord must return soon.