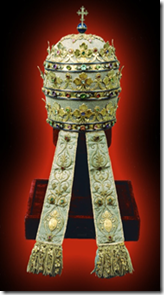 #4 Is the Pope the Head of the Church?

The Pope, Bishop of Rome and Peter’s successor, “is the perpetual and visible source and foundation of the unity both of the bishops and of the whole company of the faithful.” “For the Roman Pontiff, by reason of his office as Vicar of Christ, and as pastor of the entire Church has full, supreme, and universal power over the whole Church, a power which he can always exercise unhindered.” CCC 882

“And he put all things under his (Christ) feet and gave him as head over all things to the church, which is his body, the fullness of him who fills all in all.” (Ephesians 1:22-23).

“He (Christ) is before all things, and in Him all things hold together. He is also head of the body, the church; and He is the beginning, the firstborn from the dead, so that He Himself will come to have first place in everything. For it was the Father’s good pleasure for all the fullness to dwell in Him,…” (Colossians 1:17-19).

The Germs of the Papacy

As it is with all human beings, self-love and pride are cancers, and as exampled by Lucifer’s great fall from Heaven, can start as self-love or a self-compliment, but the consequences can be disastrous.

The germs of the evil of self-glorification already existed in the hearts of men from the beginning, and it existed in the primitive Church also, as we see with John’s pronouncement against Diotrephes in 3 John 1:9-10. The faint beginnings of the papacy are visible in the attitudes of believers as early as the first century. The Nicene age (the period of the Church after about 325)witnesses the bishop of Jerusalem receive honorary patriarch status, and the patriarch of New Rome, i.e. Constantinople, elevated to primacy in the East, who then began to rival the bishop of Rome. And, with this, Rome claimed not only the human right but also the divine right to be the preeminent authority of the Church.

Rome, very early, spoke with an air of superiority over all the other congregations. There appears to be an authoritarian spirit attached to the Church at Rome. At first letters to the other congregations from Rome were addressed as from the Church at Rome and avoided personalities, but later the name of the bishop of Rome was substituted for the Church and a personality cult begins to develop. From this point it was only a small step toward the papal absolution of Leo I (440-461) and Hildebrand (461-468), which has its end with the Vatican dogma of papal infallibility of are present age.

A Word about the Word Pope

The word “pope” by which the head of the Roman Catholic Church is designated is not found in the Bible. The word comes from the Latin “papa” meaning “father,” this is the very word, expressly forbidden by Jesus, as a spiritual title, and was not applied to the pope until Boniface III in the year 607, and it has been their designation ever since. In similar manner the title “pontiff” is not to be found in the Bible but rather comes from the pagan history of Rome where the emperor who was also high priest was called “Pontifex Maximus.” The title was adopted from paganism and applied to the head of the Roman Catholic Church as the mediator between God and men, with power over heaven, earth, and hell; and this is symbolized by the triple crown, i.e. the tiara, worn by the popes during coronation. But, doesn’t the Bible state that Christ alone is the mediator between God and men? “For there is one God and one mediator between God and mankind, the man Christ Jesus,” (1 Timothy 2:5).

The Roman Catholic Church has usurped the crown of Christ, who is the true, and sole, head of the Church, which is His Body. The Roman Catholic Church by stealth, fraud, and deception has, by all outward appearances, seized the reins of power from Christ and has now elevated itself onto His throne. Is this not the ultimate coup d’état of the Prince of Darkness? The picture is too obvious to any right minded person; yet mysteriously this Prince of Darkness exercises control over the hearts and minds of seemingly intelligent and sensible men and women. The Bible says, “For this reason God sends them strong delusion so that they will believe the lie.” (2 Thessalonians 2:11). How else can it be said that these “intelligent” people are made to believe so many outlandish claims of which there is not a shred of credibility outside the bogus evidence provided by the imposter itself. Who but the Devil would make such an arbitrary claim as Pope Leo XIII (1885), in his encyclical, The Reunion of Christendom, that the pope holds “upon this earth the place of God Almighty”?

The Roman Catholic Church has routinely made these absolute claims down through history, and then threatens with condemnation anyone who would refuse to swallow their nonsense. If it weren’t so serious it would be downright insane.

A Word from Lord Acton 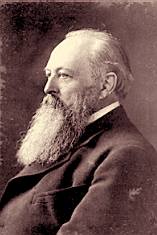 The head is to the body the singular source of power, for good or evil. When that head rises to great heights of authority is it for that reason exempt from judgment? Few men have been clearer in their pronouncements against the papacy than the Roman Catholic historian John Emerich Edward Dahberg, better known as Lord Acton. His pronouncements are accurate and legendary. In a letter to Mandell Creighton he wrote these famous words: “Power tends to corrupt; absolute power corrupts absolutely.” These words were written in reference to the power of popes and kings.

I cannot accept your canon that we are to judge Pope and King unlike other men, with a favourable presumption that they did no wrong. If there is any presumption it is the other way against holders of power, increasing as the power increases. Historic responsibility has to make up for the want of legal responsibility. Power tends to corrupt and absolute power corrupts absolutely. Great men are almost always bad men, even when they exercise influence and not authority: still more when you superadd the tendency or the certainty of corruption by authority. There is no worse heresy than that the office sanctifies the holder of it.

The arrogance of a power figure to declare something good when it is in fact evil is no different than a common bully who uses his position of strength to not only commit evil deeds but through fear and force binds others to his plots, who incur equal guilt.

In Acton’s research notes on the inquisition he wrote:

[The] object of the Inquisition [was] not to combat sin – for the sin was not judged by it unless accompanied by [theological] error. Nor even to put down error. For it punished untimely and unseemly remarks the same as blasphemy. Only unity. This became an outward, fictitious, hypocritical unity. The gravest sin was pardoned, but it was death to deny the donation of Constantine. [The Donation of Constantine was a document forged in the eighth century in which the Roman Emperor Constantine willed the Western Roman Empire to the Pope. The Roman Church taught that the Donation was genuine, and the legal basis for the pope’s civil authority, for centuries. – JR] So men learnt that outward submission must be given. All this [was] to promote authority more than faith. When ideas were punished more severely than actions – for all this time the Church was softening the criminal law, and saving men from the consequences of crime: – and the Donation was put on a level with God’s own law – men understood that authority went before sincerity. http://www.trinityfoundation.org/journal.php?id=66#sthash.8W41xxoV.dpuf

Again, in 1868, Acton made this claim concerning the slaughter at St. Bartholmew, which began in Paris, August 24, 1572, and spread throughout France:

The story is much more abominable than we all believed…. S. B. [St. Bartholomew’s] is the greatest crime of modern times. It was committed on principles professed by Rome. It was approved, sanctioned, and praised by the papacy. The Holy See went out of its way to signify to the world, by permanent and solemn acts, how entirely it admired a king who slaughtered his subjects treacherously, because they were Protestants. To proclaim forever that because a man is a Protestant it is a pious deed to cut his throat in the night…. http://www.trinityfoundation.org/journal.php?id=66#sthash.8W41xxoV.dpuf

Lord Acton said many other things, which not even a Protestant has exceeded in the denunciation of the seat of power within the Roman Catholic Church.

The papacy contrived murder and massacre on the largest and also on the most cruel and inhuman scale. They were not only wholesale assassins but they made the principle of assassination a law of the Christian Church and a condition of salvation…. [The Papacy] is the fiend skulking behind the Crucifix. http://www.trinityfoundation.org/journal.php?id=66#sthash.8W41xxoV.dpuf

To put Lord Acton’s words into perspective we need only retrace their genealogy back to their source. The Roman Catholic Church self-authenticates its existence by tracing a false line back to the Apostle Peter, a line which is pure fantasy. Their true line of descent leads us not to Peter at all, but rather to Constantine (Roman Emperor from 306 to 337 AD) and then to Diotrephes (3 John 1:9). Both of these men are examples of the world’s desire to get and hold power through human intellect, pride and vanity, and political intrigue.

Now consider the whole idea of wearing religious garb. Isn’t it to promote an individual as being of a different class, rank, position, or importance to God; if not, then why the pretense? Since God is not impressed with our appearance and only sees our hearts, the obvious usage of such things is to achieve some effect in the minds of those who hold these things to have value. Since the power of a Christian lies entirely with the indwelling Holy Spirit, who Himself is the sole influencer of men, there is absolutely no use for religious garb as we see within the Roman Catholic Church or Protestant Church. Faith in the providence of God, that He alone, without any of our psychological apparatuses or marketing devises, is able to accomplish His goals, is still a great mystery to even Christians; but true faith requires that we simply rest in in this knowledge. For this reason when we see the exultations of men through pageantry, tyranny, and religious advertising we should be alerted that Satan, whose devises these are, is on the move.

Although it is easy to look at the wholesale harlotry of the Roman Catholic Church’s gaudy persona we might easily overlook a simple thing as a protestant clerical collar or a gold cross around the neck as inconsequential, but it is not; it is all the same; it is only a matter of magnitude. Just as Diotrephes loved the primacy, so do all men have the disposition to market themselves so that they might gain a little something in the eyes of other men. Christ never promoted Himself, but walked humbly and became a servant to all, and we are to walk as He walked. Jesus is the example for the whole Church, then and now.