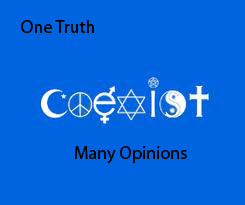 I’m not sure if it’s a recent phenomena, but I keep coming across Christians with “opinions”. And often I find when I give a scriptural backing to my argument on some topic, someone will say, “That’s just your opinion”

Now opinions can be ok in certain contexts, football teams, weather, holiday destinations, etc but when it comes to the word  of God there is only one opinion that matters …and that’s Yahwehs.

Somehow Christians, at least some Christians, have come to the conclusion that their opinion is sacrosanct and immutable. This is a deadly habit which could lead to horrible eternal consequences.

No matter what the issue is theologically speaking and no matter how it may offend or challenge; God’s clear word must always have the primacy.

And just because our denomination or favourite preacher says something, is no excuse when the Lord of Glory calls us to account for what we have believed and what we have taught. After all, He has already given us His word on every topic of consequence.

I have opinions on most every subject but my opinions are open to change if better information or a better understanding of scripture is brought to my attention.

In fact since being saved I have changed my views on many topics including baptism, tithing, religious institutions called church and various other issues. The bottom line is we must attempt to have no opinion other than God’s.

For those who don’t know the Lord and have no faith in His word, their opinion is all they have, but for the twice born child of God, we gave up our right to our opinion when we bowed to the Lord of Glory.

Whole denominations have been built on mens opinions. Jesus pronounced woe on those who reject the word of God to hold on to the traditions of men.”(Mt 15:1-9)

Today multitudes who think they are serving God are abandoning the clear teaching of scripture to embrace the deadly deceits of unregenerate teachers who have a form of godliness but deny the power thereof.(2 Tim 3:5)

Lets be frank, our opinions could be the death of us.

Some, tragically, will only be dead for a few seconds before they realise the error of their views. (Luke 16:19-23)

God doesn’t invite us to the table to have a discussion on the issues of eternity. He presents His truth and awaits our response.

For the ambassador of Christ(every believer) their personal opinion is totally irrelevant. We are not tasked with sharing our opinions but with presenting the truth of the King of the Universe.

He, fortunately for all of us, is a benevolent Ruler but His offer of amnesty to sinful rebels will not last forever and the results of rejecting His gracious offer will lead to an eternity of remorse in a place called Hell. Many so-called Christians have views on many of the words I’ve just used. Rebels, sin and Hell are some of the issues watered down by pretend believers in our current age. My question to them, “Just what exactly is your message!?”

Paul said,” I’m not ashamed of the gospel of Christ for it is the power of God to salvation for everyone who believes”, but some today are ashamed of the gospel. They present a fictitious view of God and the eternal gospel and the LORD of Hosts has very strong views on those who teach error concerning Him.

Somehow the devil has convinced some believers that truth is malleable and elastic and can be stretched to fit the viewpoint of every human alive, but they will find out that His word is a rock on which many shipwreck  themselves. It’s a sharp two-edged sword that divides truth from delusion. It’s the power of salvation and victory over the forces of evil. Our opinions on the other hand are at best powerless and at worst fatal.

Before being granted the new birth in 1983. I used to delight in telling people, “I have my own religion” I made it up all by myself (with perhaps a little help from Satan) but one day it occurred to me, “What use is my own religion if it’s not God’s religion” (In those days I still thought of God in terms of religion) and the Holy One of Israel granted me repentance unto life. Sadly too many are living by their own religion, even those who think they are right with their Creator.

An ambassador who refuses to deliver their Sovereigns message accurately is a traitor and is in danger of being recalled.

To be sure there are always going to be areas of scripture where we don’t have a complete understanding and we can and should pray for more light but some dig theological trenches on misunderstood scriptures and fight to the death to defend their view. And some make a livelihood teaching their murky opinions rather than giving the clear clarion call of God’s holy word.

And these self-same purveyors of religious perversity have convinced some of God’s people that it’s wrong to discern truth from error. “Do not judge”, they say. “Touch not the Lord’s anointed”, they lie. “Be tolerant”, they declare with total intolerance for those who stand for truth. And some gather around them these teachers who tickle their ears wth attractive lies and drink deeply the honey coated arsenic of spiritual deception.

Be sure your opinion can harm you. Be certain that your view may be the death of you. Be convinced God is right and is the only one infallibly right. Be clear on the views of your King and offer nothing else to the spiritual needs of the lost, thirsty and starving multitudes around us.

Unfortunately in the time I have been walking with the Lord, amongst the many faithful preachers and teachers I’ve encountered, I’ve also found some who rest under the false security of their man-imposed titles and stand every Sunday six foot above contradiction. They refuse to open their Bible to examine their views under the light of the word. They have relinquished any right to be called ministers of the gospel and short of repentance their end is not to be envied.

Expose those who preach their opinions rather than God’s word. Warn with loving diligence those who are drinking from the tainted wells of false prophets and teachers. Repent of your opinions if necessary and stand fast on the immutable word of God.