In my refutation of Dr. Robert L. Moyer’s pamphlet, “The Christian and War” we have finally come to his objective of answering these two questions:

1. Can a Man Scripturally Be a Conscientious Objector? and

2. Shall a Christian Go to War? 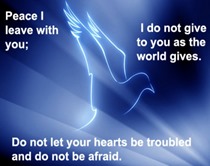 Can a Man Scripturally Be a Conscientious Objector?

tion Mr. Moyer says, “Our answer is No.” And he continues, “Romans 13:5 indicates that a man is to be subject to the powers that be, ‘Not only for wrath, but also for conscience sake.’” With those words Mr. Moyer wraps up his argument by stating, “There goes your conscientious objection.” Then he infers that, “A man’s conscience not illuminated by the Word of God is of no value at all.”

And, to this I say Amen Mr. Moyer; but let’s see who is in the dark?

There is no qu

estion that Mr. Moyer is preaching the popular sentiment of an entrenched status quo, passed down for many generations; and he not only ignores plain Biblical teaching to the contrary, but he discounts the testimony of the apostolic Church of the first 300 years of its existence, who confirmed the teaching of Jesus and the Apostles.

I don’t know if Mr. Moyer has ever seen war first hand, but for those who have, war really is Hell; and any “conscience” that is not totally cold will confirm that it goes against every conceivable moral fiber that exist in man, to deliberately kill another human being. I have two personal friends who went to Vietnam at the same time that I went, and spent two years there, they both returned as something less than human. One is drawing a 100% compensation for mental illness; he lives in a small house, in an isolated wood, and has very little contact with society. His mind is plagued with demons, that he turns into gargoyles and places in his yard, and he lives on coffee to avoid sleep. The other returned as a brute who only wanted to fight, including his wife who was cut seriously while he was in one of his rages. Before he left he was a humble, timid, eighteen year old boy, who wouldn’t hurt a fly. Should we be “subject unto the higher power,” for conscience sake, YES, absolutely; protect your conscience at all cost, and that is done by being subject unto God, the Highest power.

We need to realize that God is one of those “higher powers” of which he speaks, and I will also point out that Mr. Moyer, himself, states on the very same page that, “There may come times when there will be a clash between state and Church. When such a clash comes, in the words of the apostles, ‘We must obey God rather than men.’” His own words betray him.

With the waters all muddied by Moyer’s traditions, sloppy exposition, and popular commentary, how will we know when and where a supposed “clash” has occurred? and, to which “power” are we to “be subject”? The answer is not difficult as long as our highest desire is to possess truth. We know what the Bible says, yet there is still confusion; so where cometh our help?

The early Church that followed on the heels of the Apostles faced this same dilemma, of needing to know where to turn for truth and who to believe. Error started infiltrating the Body-of-Christ, even when the Apostles were still alive. In their message to the Church we are warned of the necessity of “contending for the faith . . .,” and this very issue of Christians and war was one the things they contended with. Christendom today generally believes that we are walking faithful to apostolic Christianity. Yet, we differ on a great number of doctrinal beliefs with the early Church; the subject of Christians and war is only one. It should be alarming to Christians today that we are at odds with the apostolic Church, and that alarm, should cause us to ask, “Why the difference?” and, “How will we discover the truth?”

In a confrontation with the Gnostics (distinguished by the conviction that matter is evil and that emancipation comes through gnosis i.e. knowledge) of his day, Tertullian (160-230), a gifted Christian writer and apologist, defended his claim of the true Gospel this way,

“I say that my Gospel is the true one; Marcion, that his is. I affirm that Marcion's Gospel is adulterated; Marcion, that mine is. Now what is to settle the point for us, except it be that principle of time, which rules that the authority lies with that which shall be found to be more ancient; and assumes as an elemental truth, that corruption (of doctrine) belongs to the side which shall be convicted of comparative lateness in its origin. For, inasmuch as error is falsification of truth, it must needs be that truth therefore precede error. A thing must exist prior to its suffering any casualty; and an object must precede all rivalry to itself. Else how absurd it would be, that, when we have proved our position to be the older one, and Marcion's the later, ours should yet appear to be the false one, before it had even received from truth its objective existence….” 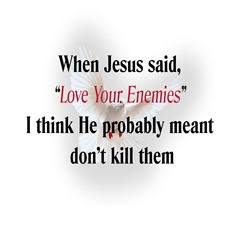 So, if the doctrine of “just war” did not appear until Augustine (354 – 430), two hundred years after Tertullian, and was 1800 out of sync with the apostolic Church, to whom should we go for authority? and who should we believe? Justin-Martyr, Tertullian, Origen, Cyprian, and Arnobius, to name only a few, spoke with a single voice, that war was simply murder, but on a grand scale.

So in the light of this new evidence let’s ask Mr. Moyer’s question again, “Can a Man Scripturally Be a Conscientious Objector?” The answer is not only YES, he can be a conscientious objector, but he should be, if he wants to be historically accurate.

All the guns of Dr. Moyer’s carnal arsenal have been trained on this single target; and now he asks,

Shall a Christian Go to War?

All of his theological cunning has been employed for this one aim, to deal a deadly blow to any and all who would dare to believe the words of Jesus, to interpret the way of peace through the lives of the Apostles, and to follow the lead of the ancient Church.

“The weapons we fight with are not the weapons of the world. On the contrary, they have divine power to demolish strongholds. We demolish arguments and every pretension that sets itself up against the knowledge of God, and we take captive every thought to make it obedient to Christ.” 2 Corinthians 10:4,5

What Mr. Moyer is trying to do is impossible, even though many have acquiesced to his ways and the ways of the general population of Christendom. The past two millenniums are strewn with the failed efforts of better men than Moyer, whose wasted labors and faulty methods tried to accomplish in the flesh what can only be done in the spirit.

“Finally, be strong in the Lord and in his mighty power. Put on the full armor of God, so that you can take your stand against the devil’s schemes. For our struggle is not against flesh and blood, but against the rulers, against the authorities, against the powers of this dark world and against the spiritual forces of evil in the heavenly realms.” Ephesians 6:10-12

“Jesus said, ‘My kingdom is not of this world. If it were, my servants would fight to prevent my arrest by the Jews. But now my kingdom is from another place.’” John 18:36

Either through ignorance of Scripture or by flouting the obvious nature of its spiritual warfare, Mr. Moyer answers the question, “Shall a Christian Go to War?” with a unanimous, “Our answer is, YES”. In total disregard to the “Word of God”, which he claims to hold in such high esteem, he says, “If your government calls, you are obliged to obey.” He bases his answer on 1 Peter 2:13,14 “Therefore submit yourselves to every ordinance of man for the Lord’s sake, whether to the king as supreme, or to governors, as to those who are sent by him for the punishment of evildoers and for the praise of those who do good.” Mr. Moyer puts the emphasis on “Every ordinance.” Now, let me ask you a question; can you think of an ordinance that a Christian would not be expected to obey? How about government sanctioned abortion? How about forced allegiance to some government idol? Or how about turning in an ethnic group tagged for extermination? You probably can think of a few more; but you get the point. Does Mr. Moyer seriously mean “every ordinance,” or is something more general being prescribed here, like obey the laws, and be a model citizen, and do what the government says so as to live at peace with them and all men?

Paul made the same kind of statement:

The same question arises here; would Paul become a blasphemer, an idol worshiper, or a male prostitute to win souls? Is he speaking literally or figuratively? No doubt he is speaking figuratively.

Obviously, we are not to obey any ordinance that is in opposition to the expressed wishes of God as delivered to us by His Son. If the government, where you reside, calls, you are only obliged to obey when there is no conflict with the ruling authority of your own nation. For example; if an American living in another country is required to join the military of that country and to go to war against America, that citizen of America is not obliged to obey that government, even though the country of his residence has a law requiring residents to fight in their military. If that American disobeyed American law and waged war against his home country, and he was caught, he would be punished severely. You may remember the story of John Walker Lindh, a United States citizen who was captured as an enemy combatant during the United States' 2001 invasion of Afghanistan. He is now serving a 20-year prison sentence in connection with his participation in Afghanistan's Taliban army. Similarly, if we are ignorant of God’s will in this matter of war, we should make it our duty to find out the truth before we are captured and found to be in league with the enemy.

At the end of Mr. Moyer’s argument he does what is now a very popular way of presenting the Gospel; have your readers say a few lines of Godly chatter, totally ignore repentance, then lend them a little applause. This man who repeatedly rejected the plain and simple truth now asks, “. . . How do we come to God? By faith! Just a simple trust in the finished work of the Lord Jesus Christ.” Then in the widely held formula of “easy believism” be continues by asking, “Will you say right now: ‘My faith looks up to Thee, Thou Lamb of Calvary’”?

These are beautiful words to a broken heart. Is it possible that anyone could be saved by repeating these few words? Yes, it is; but I would also say that these are deceptively pretentious words that mean absolutely nothing unaccompanied by genuine repentance; and there lays, maybe the greatest fault, of modern Christianity.

One more article is in the works as the conclusion, and then the end will come.

Thank you for your patience.