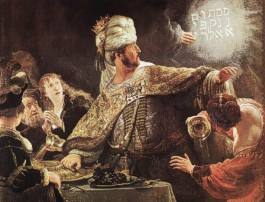 Roger Oakland is back after a near death accident that stopped his commentaries from shining the light of truth in the eyes of the Deceiver. His words are hard to read by those entrenched in the apostate church, but many have responded as the Holy Spirit awakens His sleeping elect, and calls them out and away, from the plague that is about to come on the manmade apostate religious institution. Roger's voice is not the voice of the rich and well endowed Laodicean church, but more like a voice in the wilderness. He and others, like IndyWatchman, are doing the only thing they can do, and that is to warn as many as will listen, before it is too late.

Please give Roger an ear, along with an open Bible, and see if you too don't hear the voice of the Lord calling His children out.

Pride goeth before destruction, and a haughty spirit before a fall (Proverbs 16:18).

A message is burning in my heart. While I have not been active in ministry this past year because of what has been a “forced sabbatical,” I am thankful to report that God has raised me up from the brink of death. I thank God for His healing touch. Once more I am able to think properly, make observations, write, and speak out. Thank you Lord for your great grace!

Over the past few months, conversations with brothers and sisters in Christ from all over the world have convinced me that a watershed standard is beginning to occur. What do I mean by this? Many believers are being led by the Holy Spirit and are waking up from their indifference and are now being called into action. They recognize that we are in the last days. The Gospel of Jesus Christ and the freedom to proclaim that Gospel are under attack. All biblical standards are being eroded. These servants of the Lord see that this is a time to stand up for our Lord and Savior whatever the cost. The time has come to proclaim the truth of His Word. An expose of apostasy has begun! The prophet Isaiah spoke it well when he stated: “When the enemy shall come in like a flood, the Spirit of the LORD shall lift up a standard against him” (Isaiah 59:19).

click here to read the rest of the commentary

Thanks for posting this Steve. I too have a lot of time for Roger Oakland. I heard him speak a year or so ago here in Sydney Australia and he always has something beneficial to say.

You are welcome. I am so glad Roger is back. I do not read everything he writes, but I know he is not appreciated by darker forces and that his accident, well, was not accident, if you get my drift. Satan can kill a man but he cannot kill this movement, because it is fueled by a power greater than himself. The end-time scenario, that is beginning to unfold, will ultimately result in the depositing of many saints under the altar of God, and that is not a bad thing.

Thanks for stopping by. I visited your site and am pleased to have found yet another who is fleeing from the wrath to come.