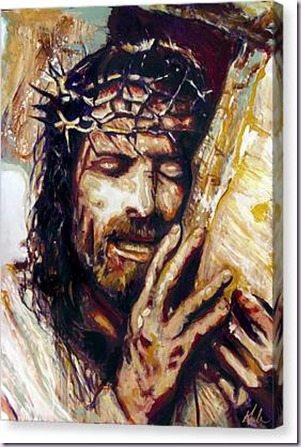 We have all heard preachers talk about the Cross? What did you think of that? How was it delivered and how was it received? What is a “daily Cross”?

Looking from the inside of the Protestant Church, and I would dare say all of today’s Churches, of which I was a part of for more years than I want to admit, you would never know that there was such a thing as a personal Cross to bear. But, such is the beginning of the true Christian life. The Christian life is a continual, day-in, and day-out bearing the Cross of Jesus. And, such is the ending of the successful Christian experience, a life to death. Yet, the “common” Christian knows nothing of such a thing.

I am not familiar with that kind of Christianity, like the Apostles, the early Christians, the first Anabaptists, the persecuted Church. Paul’s words to Timothy, “If you live a righteous life you will be persecuted” and Jesus’ words to His followers that “If they hate Me they will hate you” signifies a normal continuous state of the Christian life. Is this the experience of Christianity today? If not, then an honest question should be, why not? Why aren’t Christians in America being persecuted? What would a Christian have to say or do to be persecuted? If worldly America has accepted our version of Christianity can we rightly conclude that we are not living righteously? What, pray tell, is the righteousness Paul referred to that results in persecution? This kind of Christianity is foreign to this generation and many past generations!

We look at the landscape of common Christianity and we can easily see that something is drastically wrong. The Protestant Church and the Anabaptist Church have both failed according to Jesus and Paul. The Protestant Church has joined the world in nearly every respect, they have only become the “conservative” side of the equation. And, the Anabaptists have lost their voice and retreated to their country communities where they are known as “the quiet in the land.” Jesus laments whether or not He will even find faith on the earth when He returns. If persecution is one of the fruits of living a Christian life then we should not be surprised when we read that only very few will be able to traverse the strait (as in difficult) gate.

The Cross is the instrument of undoing what we have mistakenly called the Christian way of life. The Cross-life is not attainment we achieve through reading books, living in community, and learning about the saints of history but rather a lifelong attitude of death that is fearless in the midst of those who angrily stop their ears because of the burning coals of truth. The instrument of our undoing is a voluntary embrace of a path which subjects self to ever fresh denials, disgrace, and death. The undoing of “self” is the road to Golgotha. Have we learned everything about our Anabaptist forefathers except how to bear the instrument of our own death?

The day in which we live demands that we re-evaluate this thing called death. This day demands that we answer the question of WHY we are not being persecuted and WHY Christianity is no threat to the world. Will we stand before the One who lived the crucified life and dare say to Him that we were fearful of the angry mob or that things we considered more valuable constrained us? Is the Church in the condition it is in because the “righteousness” that the Lord is looking for is not present? Is the blood of the martyrs no longer the seed of the Church?

One reply on “The Instrument of Our Own Undoing”

I have no excuse for my wasted years, although I like to think that my life would have followed a different path had American Evangelicalism truly embraced the Cross that it claims to preach. Thanks for the reminder of our calling. I am striving to make what’s left of my life count for eternity…