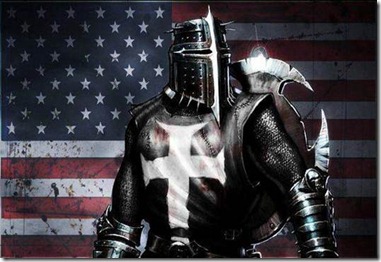 The Christians’ Justification for War and Violence

As I stated in the first article, it is virtually impossible to find any support for Christians taking up arms against their enemy or for self-defense during the first 300 years of Church history. Today Christians proudly justify patriotism, involvement in politics, personal defense, capital punishment, and “just war;” and our arguments sound very good and Biblical. But I can find no examples of this in the New Testament; yet for the past 1800 years it is nearly all we hear, or read, coming from institutionalized Christianity; Why? Were there some secret documents discovered, after 300 years of Christian nonresistance, which suddenly allowed believers to turn their backs on the examples of Jesus, the Apostles, and 300 years of documented nonresistant martyrdom? Of course there were no secret documents discovered; so why the sudden shift in thinking?

War is God’s way, amongst unbelieving mankind, of governing morality within nations and states, preventing wholesale anarchy. By it He puts mankind on notice, of the value of consistently righteous living, and the penalty of rebellion. The history of human society is largely the history of war, and therefore it is natural to explain war as a continuum of God’s unfolding plan for all of history, past, present, and future. To the natural Christian mind the words of Jesus, “Resist not an evil man” Matt. 5:39, and many other like verses, must be construed and interpreted in the context of this continuum of war and violence to make sense. This natural worldly thinking of Christians allows no distinction between the covenants of the Old Testament, with its wars, and the overriding principles of the New Testament, and consequently between the kingdoms of this world and the “Kingdom come.” The idea of war flows naturally from one to the other and all interpretations of Jesus must be made to conform to this flow. Any kingdom, whether here now, or “. . . to come,” must have as a contingency the supposed God given right to impose punishment on evil doers; how else can Christian righteousness be maintained and evil overcome, they say?

The Bible tells us over and over to not trust our thought processes and that to do so will only lead us into deeper darkness. And, we are told that we are a deceived race, and cannot think clearly, and must rely solely on faith and trust in the sure words of our Lord and Savior, who alone can lead us out of the deep dark woods. The consensus of Christian believers cannot conceive with their own mental processes a life lived on the explicit commands of their Savior. How many in a hundred can imagine living a life of nonresistant love toward their enemy, as exhibited by our Lord; or how many in a hundred thousand would even want such a life of surrender in the face of evil; and how many in a million would, in fact, lay done their life and pray a blessing on someone who was placing a noose around their neck? Can you wonder now why uncompromised trust and faith are so necessary? Never in our own thought processes could we ever rationalize such a thing; every ounce of our earthly strength would be mustered to resist, and not to surrender, love, and bless; but this is exactly what God requires.

But what would become of the world, our country, our families, our own lives, if all Christians lived this way, Christian’s ask? History has shown that that is not likely; only a relative “few” will enter that path, and their cross will be the cross of their teacher, who they follow; for “a student is not greater than his Master,” and if they persecuted Him, they will persecute the few. In the upside down Kingdom of God the weapons of our warfare are spiritual, and this is where the real war is waged, and in that world, we are told that good will overcome evil, and that is the world that every Christian claims to be living in and for, yet they promote war and the machinery of war that they think will secure their own personal peace and happiness; but the Bible says they have been deceived, and have settled for an imitation. God withholds vengeance for Himself; “Vengeance is mine sayeth the Lord; I will repay.”

Here are a few reasons for the justification given. Let’s start with Augustine since he is the recognized apologist for the “just war” theory, a phrase that originated with him in the year 413.

During the reign of Emperor Constantine, the Christian Church began receiving preferential treatment by the empire that it had once so steadfastly opposed, and war which had once seemed so evil, now appeared as a necessary means for protecting and spreading the Gospel. With the wounds of past persecutions still evident they were now invited to take seats as governors of the world, and they quickly forgot the words of their Lord, and chose for themselves, and their posterity, a life of ease and importance.

Christianity's triumph over the Roman Empire now resulted in the easy defeat of the Empire over the Gospel; its ruin came as a well-camouflaged ambush and they gave up with little protest.  Before the time of Constantine it was forbidden that any member of the Roman army, to be a Christian.  By the year 416, no one could be a member of the Roman army unless he was a professing Christian. It was Augustine who made the appropriate accommodations of Christianity to its new rank as a privileged religion in full support of the state.  Augustine confessed to believe, on the basis of Matt. 5:38-42, that a Christian had no justification to defend himself from violence. But he conveniently identified a problem which no earlier Christians had faced, i.e. since war flows through history and it is obviously a part of the present economy, what part should “love” play? Augustine stated that there is a loving obligation to use violence if necessary to defend the innocent against evil.  Now that Christianity was a part of government it was necessary to concede some points and allow for a “just war” principle; he formulated the position that was to predominate institutional church teaching from that time right up to the present. Ever since, Christianity and nationalism have been inseparable, and those on both sides of the aisle have found it easy to manufacture and declare wars as "just," and even divinely ordained. As a consequence, the world regards Christians as among the most warlike factions on the face of the earth.  And little wonder; two-thirds of the people killed in the last 500 years died at the hands of fellow-Christians in Europe, to say nothing of those whom Christians killed in the course of colonizing the rest of the world. Enough people have been killed in wars to people twenty of our planets, yet Christians glorify and justify it still.

Augustine was one of the first to shamelessly assert that Christians should not obey Christ’s words to be nonresistant, despite the famous passage, Matthew 5:39, which says "But I say, do not resist an evil person! If someone slaps you on the right cheek, offer the other cheek also". He downgraded this to a personal and philosophical stance:

"What is here required is not a bodily action (i.e. outward obedience), but an inward disposition. The sacred seat of virtue is the heart"

With a few words and casual manner Augustine boldly seats himself on the throne of our Lord and overrides 300 years of simple obedience. Isn’t turning the other cheek a “bodily action,” and “an inward disposition” really just hypocrisy and latent rebellion? Jesus makes it as plain as day, even a child can understand this; no philosophical/theological insight needed here. Nonetheless, Augustine asserted that obedience and peacefulness in the face of a grave wrong, which could only be stopped by violence, would be a sin. Defense of one's self or others could be a necessity, especially when such defense is authorized by a legitimate authority, i.e. government or church sanctioned:

Augustine unwittingly portrays Jesus as a dupe, and condemns His greatest of all charitable acts as “a sin.”

“You have heard that it was said” is a reference to the Old Testament law which Jesus is here turning upside-down. He has effectively overridden the old law and replaced it with a new law, the law of love, “The entire law is summed up in a single command: "Love your neighbor as yourself." Galatians 5:14. Augustine is not advocating love of neighbor; he is justifying his demise. Jesus has not allowed any contingencies to justify what Augustine is permitting.

Augustine’s justification has really caught hold in the Church, but it is all a vapor. He was the one who took all the piecemeal works of others and solidified them into a working formula for war and self-defense. There were others who followed his lead and built on his framework, but the whole thing is built on sand and has no validity in the New Testament.

My intentions were to have only a three part series, but it is going to take a fourth part to tie up the loose ends.

This is a very important subject, and I believe it lies at the root of the problems within the Body of Christ today. If Jesus message to us about the Kingdom of God was one of complete nonresistance to evil men and we have distorted it into a justification for war and violence we have put ourselves 180 degrees out of sync with His desires, and consequently His salvation. If His message to us is that we must take up spiritual weapons to defeat the enemy, and we hear that as a call to muster the world with all of its mechanized forces to put down evil, using the very evil we are to overcome, how can that be “following Jesus” or “taking up our cross”? If I am correct this is a grave problem.

The world teeters on the brink of destruction; as Christians we need to get it right. The philosophy of fighting evil with evil has not worked! It is time for all Christians to force the issue on their leaders and make them prove that God is allowing their participation in the destruction of human life. If God is not complicit in our schemes for world peace at the end of a gun, then we need to start cleaning house, starting with His house, the Church.