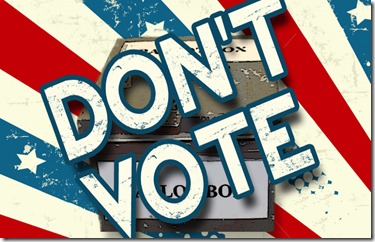 For me, leaving the political arena, many years ago, was a hard won battle. I just felt sure that I needed to cast my vote to hold back the veil of darkness and to be a legitimate Christian, along with persuading many others to vote my way.

What I discovered was that the veil of darkness was over my own eyes and that it was God Himself who makes even our enemies to live at peace with us when our ways please Him, and not my vote, or marches on Washington, or letters to my congressman.

What I also discovered was that my pleading and prayers only witnessed the continual worsening of the already serious illness of unrepentant sin that our Nation has fallen into.

My vote equaled the abandoning to men and politics what God said only He would do. Will my vote, or the vote of many people change what God has determined for this country? If I don’t vote have I hindered God from exercising His will?

Isa 2:5-9 “O house of Jacob, come, let us walk in the light of the Lord. Surely [Lord] You have rejected and forsaken your people, the house of Jacob, because they are filled [with customs] from the east and with soothsayers [who foretell] like the Philistines; also they strike hands and make pledges and agreements with the children of aliens. [Deut 18:9-12.] Their land also is full of silver and gold; neither is there any end to their treasures. Their land is also full of horses; neither is there any end to their chariots. [Deut 17:14-17.] Their land also is full of idols; they worship the work of their own hands, what their own fingers have made. And the common man is bowed down [before idols], also the great man is brought low and humbles himself — therefore forgive them not [O Lord].” AMP

Do you think getting the right man in office is the cure for our nation? I don’t think you do. Our efforts have been futile in the past and they are futile now.

I would not break fellowship with someone desiring to vote, but I do think they are wrong.

As much as I would like to see the Lord’s Church repent and have their eyes opened I can’t see it happening on a large scale. Our Lord’s command to “come out from among them” includes even their involvement in the political process, even voting, and I am learning daily that it goes much further than I have even imagined.

There are many passages of Scripture that declare God’s anger with how the world governs. Ezekiel’s example, says plainly:

Ezek 22:23-29 “Again the word of the LORD came to me: “Son of man, say to the land, ‘You are a land that has had no rain or showers in the day of wrath.’ There is a conspiracy of her princes within her like a roaring lion tearing its prey; they devour people, take treasures and precious things and make many widows within her. Her priests do violence to my law and profane my holy things; they do not distinguish between the holy and the common; they teach that there is no difference between the unclean and the clean; and they shut their eyes to the keeping of my Sabbaths, so that I am profaned among them. Her officials within her are like wolves tearing their prey; they shed blood and kill people to make unjust gain. Her prophets whitewash these deeds for them by false visions and lying divinations. They say, ‘This is what the Sovereign LORD says’-when the LORD has not spoken. The people of the land practice extortion and commit robbery; they oppress the poor and needy and mistreat the alien, denying them justice.” NIV

When are our eyes to see and our ears to hear? Ezekiel’s following words pronounce the judgment.

Ezek 22:30-31 “I looked for a man among them who would build up the wall and stand before me in the gap on behalf of the land so I would not have to destroy it, but I found none. So I will pour out my wrath on them and consume them with my fiery anger, bringing down on their own heads all they have done, declares the Sovereign LORD.”
NIV

His words in the next passage, I believe, not only identify Samaria and Jerusalem but can identify twin religious daughters of a prostitute: the Catholic and Protestant churches.

Ezek 23:1-4 “The word of the LORD came to me: “Son of man, there were two women, daughters of the same mother. They became prostitutes in Egypt, engaging in prostitution from their youth. In that land their breasts were fondled and their virgin bosoms caressed. The older was named Oholah, and her sister was Oholibah. They were mine and gave birth to sons and daughters. Oholah is Samaria, and Oholibah is Jerusalem.” NIV

Ezekiel’s following words are almost pornographic in there description of these two daughters (I will not quote them here), but they aptly envision the church of these modern times. These two daughter were clearly out to change the world by the power of their perverted religion, and cast their vote along what they thought was best for them, but only resulted in bringing judgment on themselves and their followers.

When Christians demand a king to rule over them God will oblige them, then they must eat the fruit of their decision.

Exactly! Thank you for your service in this ministry! I’m blessed to have bumped into you over here, especially as there are so few who get it. It is worse now than ever as we are living in the time of the great apostasy. We need to put the Bible above all, and that is really all we need. If something else aligns with it, fine, but if not, into the fireplace it goes. But nowadays you will be hard pressed to find one book that is not apostate. But they place these books, music, commentaries, theologians, seminaries, movies, speakers, etc. on a pedestal (idolatry) and the Bible is someplace below in the dust. I recall walking into one “Christian” bookstore and they had all these fad books on top of a shelf stand, and the bibles were all the way down, literally with a layer of dust on top. At another such store, it was like entering the den of abominations brought into the temple during Ezekiel’s time. I went to look for Foxe’s Book of Martyrs – and they had to order it! O :
The Word of God comes above all else, but they shove it aside for what some famous speaker said instead. A typical example that really is bad lately is this one: there are plenty of discernment ministries, and yet so many of them promote John MacArthur. Now sure, he has said some things that were good, and others that were not. People can argue about the gifts and such things but this example was different. He said that it would be “Okay” to take the mark of the beast and still be saved! Without batting an eyelash. In Rev. 14; 9-11 it says all who take the mark go to hell, period. No, you can’t just ‘turn around and repent’ and ‘be okay’ after that. But, that is what he said. Some of us who know of this, we warn and warn and yet the same sites will still continue to promote him! The evidence is on internet video for anyone to verify but they keep on waving his banner and blowing his horn as if he is somehow exempt, when that makes him one of the biggest wolves on the landscape. There are other examples, but there are some strange things and agendas going on! All they have to do is read the bible, watch the video (many attest to and warn of it also, not just me), put both in the balance scale, and it’s a real no brainer! But alas… !

In the end, either we took the Lord at His word because we took Him as our Lord, or not.
Thank you, and God bless you too!
Faith

Wow, I’m not the only one who gets it!

And look at the candidates we are left with! In a good conscience I could not vote for either one even if I did vote! And, the ‘lesser evil’ is still evil and I cannot vote for it either. Even if they hide it well, to rise to that level, trust me, the evil is there. These days they are passing around that false argument that not to vote for one is to vote for the other and similar arguments. That is clearly false. A vote for the other is a vote for the other, nothing else. I will keep my hands clean of voting for either one. I get so tired of all the blogs rallying around a particular candidate as if he were the end-all solution! Do they even have a clue?! And like you said, the GOSPEL is the solution, not politics when it comes to changing anything.

Thanks for visiting IndyWatchman. We don’t get many visitors so I really appreciate the ones who stop by.

You are absolutely correct that there are not many who “get it.” It really is quite simple once you get past all the commentaries, books, theologians, seminaries, and preachers telling us what and how we are to understand Scriptures. If we say we “believe” Jesus then we should at least take His words at face value, the was He spoke them.

Thanks again and God bless you.