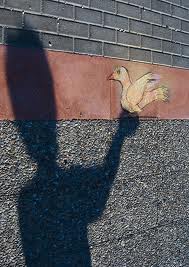 On a day, not too far distant, the Lord, in His Majestic Glory, will illuminate this world, and the shadows will all flee away, and men will become brutally mindful, that they stand naked and defenseless, with no darkness to run to.

Today we live in a world of shadows, not unlike the stories we read in the book of Judges, “every man doing what was right in his own eyes”. Joseph Seiss was one who had some clear vision and was able to unravel quite a lot of what has become the mysterious book of Revelation. He is able to cut through the mist and fog of popular religion and get to the truth of what John was given by Jesus, and to make the blessing a reality to those who seek understanding.

The book is in the public domain and can be downloaded from the internet for those who are interested. It is well worth the read.

of the most remarkable paradoxes of the Church of our times is its abhorrence of materiality in connection with the and the eternal future, whilst practically up to its ears in materialism and earthiness. Were one of the old Christians of the Apostolic age to revisit the world to take a look at our modern Christianity, I think he would be greatly puzzled to understand how, under the guise of spirituality, the whole Church is permeated and loaded down with carnal philosophies, hopes, and aims. Remembering the sublime simplicity of the ancient times, when the Church was set, like a golden circlet, on the head of the King of Glory, in contact everywhere with Divinity, he would be amazed to see how that circlet has been divorced from its original setting, stained with the flesh, and pushed into the morasses and bogs of this world, whilst earthly glories — crowns, mitres, tiaras, wealth, and secular consequence — are looked to and worshipped everywhere as the insignia of what in sad mockery is called a “spiritual” kingdom! Would he not wonder to find Christians locating their most orthodox rejoicing in monarchs, in popes, patriarchs, bishops, sect leaders, numbers, luxurious arts, boastful speeches, worldly orators, secular education, march of intellect, and a fancied progress toward a “spiritual” millennium of mere secularism, to merge at last into an empty and impossible heaven! And venturing to inquire of some of our popular preachers, whether this is thought to be the proper waiting for the Lord from heaven, — the way to pray “Thy kingdom come,” — the method by which to realize the blessed consummation when it shall be “on earth as it is in heaven,” — the holding fast of the characteristic and animating patriarchal hope of a celestial city which Christ has gone to build and to bring down out of the heaven as the eternal residence of his enthroned saints, — what would be his surprise to get for answer: “Sir, you are laboring under a delusion, — the kingdom was set up 1,800 years ago, — the speedy coming again of Christ in person to reign on earth is a carnal idea, long since exploded, and held only by a few eccentric people who cannot rise to a conception of the true spirituality of the Bible; — and as to the heavenly , why that is only a gorgeous Oriental symbol of the beautiful church state which you see all around you. The glory of Christianity is to keep abreast with the times, to press popular education, to create machinery to reach and elevate the masses, to follow up the conquests of arms with Bibles and missionaries, schools and civilization, to purify and influence legislation, to improve society by gradual reforms and general enlightenment, to win for the Church the patronage of the rich and great, and so to progress till the whole earth shall rest in the embrace of a worldwide ‘spiritual’ kingdom (located here in Satan’s lap!) to last for indefinite ages! “With a groan over his inability to rise to such a philosophy, I can fancy the ancient saint gladly returning to his grave, to sleep in honest earth till that resurrection on which his hopes were fixed, rather than hear any further about a “spirituality” so carnal, and a Christianity so doubtful and earthy.

A spiritualized earthiness is simply a white-washed sepulcher; and an incorporeal and immaterial eternity for man, is equally aside from the teachings of God’s Word. No wonder that professed believers of our day are anxious to put off getting into the heaven they believe in as long as the doctor’s skill can keep them out of it, and finally agree to go only as a last despairing resort. It has no substance, no reality, for the soul to take hold on. It is nothing but a world of shadows, of mist, of dim visions of blessedness, with which it is impossible for a being who is not mere spirit, and never will be mere spirit, who knows only to live in a body and shall live forever in a body, to feel any fellowship or sympathy.

3 replies on “A World of Shadows”

Good quote from Seiss, I will also look it up and download. He sure does take a good poke at amillennialism too,

Hi Brother
thanks for posting this. We are in the middle of the big move at the moment but I will track down Joseph's book when I get some time. He certainly seems to have the insight into churchianity that is so needed today. Bless ya Brother

I read a quote from him a while back and was impressed enough to invest in the purchase of the book. The size of the book and the older style of the English language meant that it would not be a quick read, so I left it on the book case for some time before digging into it. I’m not much for e-books because I annotate nearly everything I read, and I don’t think I have ever annotated a book more than I have this one. His insight opened up so many chains of thought, and connected so many dots that I prize it as one of the best books in my library. He will make you think, and re-think, a lot that is taken for granted, and completely devastates the programed thinking of institutional mentality.

Good reading friend. I hope you find him as interesting as I did.