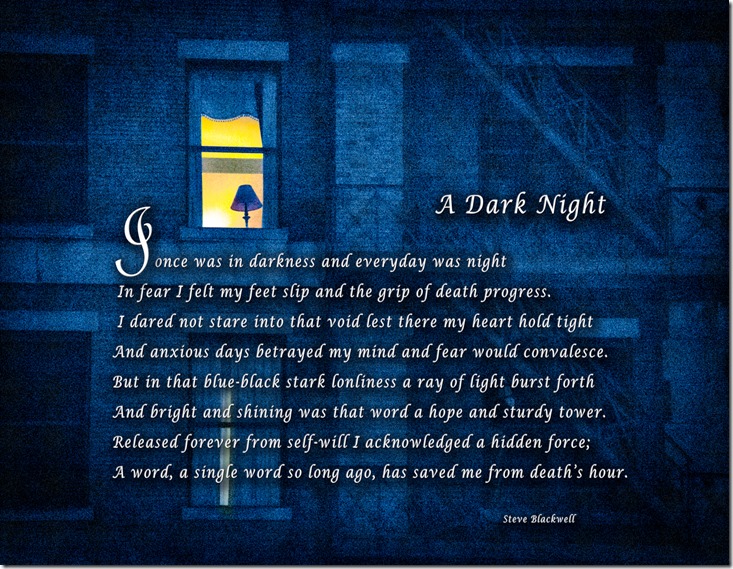 2 replies on “A Dark Night: A Poem by Steve Blackwell”

My own Testimony…coming out of the RCC
I know plenty about the Catholic doctrine, my own fathers was in the seminary to be come a Catholic priest, he was 3 months from becoming ordained, he had taken his first and second vows, but had to leave to care for his sick mother, and during this time, he met my mother. He may have left the priesthood, but his heart never left the Roman Catholic Church. Sunday was always a drudge for me, I was a very observant child and that never changed, as I grew, I watched the Mass and how the priests acted. for many of them, the Mass was as much a drudge for some of them as it was for me. I did all the “gotta do’s”, first holy catechism, communion, confirmation, confession (ugh!!!), stations of the cross… and I still remember the original “act of contrition” word for word. It was a heavy burden…mortal sin, purgatory, hell, damnation…..observances like lent or no meat on Fridays, genuflecting and the sign of the cross toward the alter before you are seated, kneeling, standing, sitting, more kneeling…..and then communion…. Prayer candles, rosary beads, bowing before the statues. Sunday was church day no excuses, unless you were dead, because as they say, it is a mortal sin to miss mass. But, of all the things we were commanded to do….’NO BIBLES”…we never read the bible. When I left home, I left that Church and everything associated with it behind, and never went back until the week after I got saved…I felt in my heart that God wanted me to go back, I was devastated, but I went…I sat behind a churh filled with lifeless bodies, the sound of hundreds of voicest void of any emotion or enthusiasm…that was the last time I set foot in a catholic church, God had me go so that I could let it go forever…I cried all the way home, I was free…free from them forever….Amen

What a wonderful testimony and full of honesty and compassion for those still there. There are very many Christians today who need to hear the Truth, both Catholic, and Protestant. America is a vast mission field of un-belief. The Lord is coming very soon we have no time to waste. I sense a great concern for the lost in your words; be obedient to the calling. I for one will be praying for you Mary Brownlee.