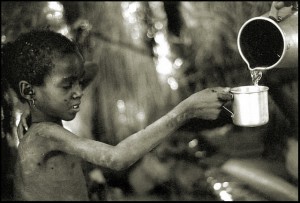 A certain man placed a fountain by the wayside, and he hung up a cup near to it by a little chain. He was told some time after that an art-critic had found much fault with its design. “But,” said the man, “do many thirsty persons drink at it?” Then the people told him that thousands of poor people, men, women, and children, slaked their thirst at this fountain. The man just smiled and said that he was but little troubled by the critic’s observation—he only hoped, that on some sultry summer’s day, the critic himself might fill the cup, and be refreshed, and praise the name of the Lord. Here is my fountain, and here is my cup: find fault if you please; but do drink of the water of Life. I only care for this. -C. Spurgeon