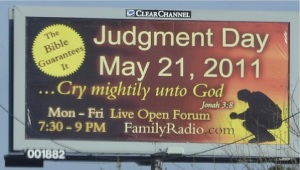 The false prophet Harold Camping (see my article Harold Camping proclaims the Lord’s return will be in May 21, 2011) has put up billboards across the nation advertising his belief that the Lord will return for His Church on 5-21-2011, one such billboard is in Indianapolis. Harold’s heresy has been matched by the American Atheists who have put up their own billboards mocking, not Harold Camping, but all of Christianity. My question is, what will Harold be doing on May 22?

3 replies on “Time Is Running Out For Harold Camping, Judgment Day is Definitely Coming”

You asked,
"My question is, what will Harold be doing on May 22?"

Good question.  Hopefully packing up his ministry and shuttin' down for good.  But I doubt it.  How do these false prophets manage to maintain a "captive" audience?  Perhaps wilth each failed prophecy the current crowd abandons them in search of something "new", so they lay low for a while, then re-surface with a new prediction, ensnaring a new, vulnerable and attentive crowd.

Just speculation on my part.  One thing I do know: it's the mystery of iniquity at work.

We could only hope that Mr. Camping would shut down his ministry. Unfortunately there are always ten more to take his place.