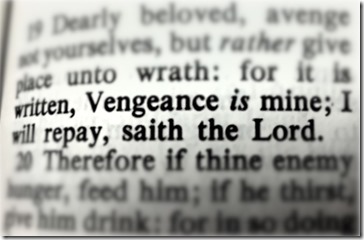 “Vengeance is mine saith the Lord, I will repay.” Yet, very many Christians across this land disagree with God and buy up guns and ammunition, enlist in the military, and belong to police forces. This response to God is rebellion and unbelief. They rip the reins of power and authority from the hands of the Almighty taking vengeance and justice into their own hands relegating God to nonexistence or unimportance and preach that “this is serving God.” They say they believe God but in their actions they deny Him. “There is only one Lawgiver and Judge, the One who is able to both save and destroy. But who are you to judge your neighbor?…” James 4:12

Is it any mystery why Christ would say, “Will I even find faith on the earth when I return”? Is not this the epitome of good becoming evil and evil becoming good? Christians have no business in law enforcement, of any kind, when they have been freed from all law and are judged by no man. Uniforms and badges are symbols of worldly power of which the true Christian has no use or desire. Those who belong to the world gravitate toward the world and its symbols and those who belong to Christ gravitate away from the world and toward His likeness, displaying His symbol of love toward all men equally even toward those the world condemns, the enemies of society.

Christ died for all men. Who are we to decide that a man is unworthy of life? Is it our job to decide who is worthy or unworthy of life, the Gospel, or eternity with the Father? My advice to these confused Christians is no different than the advice given to the primitive Christians. Tertullian, for instance, wrote an entire treatise forbidding military service among Christians (The Crown) and such sentiment is found throughout his other writings (On Idolatry). Origen too condemned military service whenever he addressed the subject. And Lactantius agreed: “A just man may not be a soldier” (Divine Institutes, 6.20). The general attitude of the Primitive Church (from Christ to Constantine) was that Christians do not serve in any capacity of government or where harming another person is a requirement of that position.

It is only from the time of Augustine and Constantine (a time when the Church gained great power) that the institutionalized “Church” promoted killing by believers alongside unbelievers in worldly campaigns to secure the state and to enforce the peace. We should not be surprised that corruption slowly crept into the Church since it was prophesied by Christ Himself and by His Apostles. But, today it is accepted without a word of disagreement or wonder that it is the duty of all Christians to take up arms against the enemies of society. Most Christians not taking the time to investigate the history of the Church, that Christ and the Apostles founded, accept the false teaching of the corrupted aberration. It is only in spotty cells of believers that the truth is still preached without reservation against popular doctrines that have been politicized for the sake of patriotism and feel-good religion. Augustine, on several fronts, has cost the Church dearly, but none so much as his “Just War” theory. This man did Christ no favor by releasing the restraints that help keep the flesh in check. And Constantine, being a political genius (much like Trump) used religion to his own, and the state’s, benefit. Of course, the flesh, having an affinity for evil, adapted easily to this new freedom to express the very things that Christ through the Spirit came to mortify.

So, here we are at the end of the age and barely one in five hundred are aware that Christ will soon return and separate the sheep from the goats and that their lives are in peril of hearing those awful words, “Depart from Me I never knew you.”

At that time we will discover, without question, whose vengeance it really is.

One reply on “Whose Vengeance is it Anyway?”