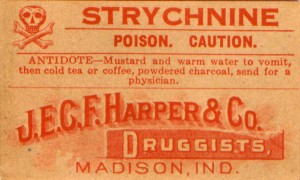 Tony Jones doesn’t like labels. He says he would rather think of his Christianity as “emergence” and not “Emergent.”

There is only one Christianity and it ain’t emergence or Emergent, neither is it Pentecostal, Baptist, Lutheran, or any other sect. Following Christ is to be a Christian, and for the most part they all have it wrong, but their “labels” at least lets us know what to expect from them. With out labels it is very hard to nail anything down, everything becomes silly putty in their hands. They can believe one thing one day and the opposite the next day, or nothing at all, or both, it is the freedom of an anarchist, both lawless and rebellious.
Tony doesn’t like labels because he says,

“they seem to us (emergence types) convenient ways of boxing someone in. . . .”

when he would much rather be a moving target. This statement is just smoke or camouflage. Liars, cheats, and scoundrels hate labels because they identify who and what they are. Sit at a poker table in Vegas and try and identify the pros. Those professionals hate labels too. They want to look like tourist; they look harmless and innocent, but they are wolves, there to separate you from your bankroll. Hang a label on these pros and the table will empty; at least the smart ones would leave. The first rule of poker is that you never play against someone better than you. But, most people think that the game is just a matter of luck anyway, much like religion. They never pay attention to the “tells” that identify or label a person as a shark or a false teacher, who are both classified as wolves.

Do you see how “labels” can be counter productive to vandals who want to separate you from your valuables? Labels identify people and things, and keep us safe in the world. Thieves, cheats, marketers, card sharks, and false teachers and preachers know this. Subterfuge, misrepresentation, deception, pretense, and dramatics are all the tools of those who fear exposure and labels. At the poker table the pro will likely advertise his stupidity and ineptitude by playing fast and loose, and present themselves as something they’re not. He’ll look like a sap to the vacationer who thinks he’ll be an easy touch. Then the truth comes, when it is too late, and the pro has that monster hand he was waiting for, and the real “sucker” is revealed. This is called “advertising” in the world of poker, and is used with great effect. Marketers advertise also and generally try and trick you into believing something about their product that isn’t true: cars, clothes, cologne, alcohol, you name it, they are nearly all deceptions, lies, and illusions. They allow you to think that there is value where none exist. Your identifying of these lies would permit you to stick a “label” on them and classify their tactics as dangerous and deceptive.

What that poker player is saying by his not saying anything and putting on a show, by his dress and by his actions, is that “you need not worry about me, I am harmless, just relax and have some fun, and please don’t label me.” I believe Tony Jones is saying much the same thing by presenting labels as a bad thing. He says that labels box people in, and I say they protect people. He cannot live by his own philosophy. Does Tony label people? Isn’t Pentecostal a label? Do labels inform us and protect us? Would Tony take a bottle from his medicine cabinet without consulting the “label?” Would anyone? Did Jesus label people and things? Jesus said “Take heed and beware of the leaven of the Pharisees and of the Sadducees…. How is it that ye do not understand that I spake not to you concerning bread…? Then understood they how that he bade [them] not beware of the leaven of bread, but of the doctrine of the Pharisees and of the Sadducees.” Mt 16:6,11-12 Was Jesus putting these teachers in a box? Did He label them? You bet He did, and for our good, for our protection. He identified the threat and stuck a label on it, and expects us to heed the danger.

People who have nothing to hide do not fear labels. Labels are markers and road signs and warnings, to direct the wayfaring man or woman to safety.

Beware of the smoke and slight of hand of the religious magicians, for they will cheat you out of much more than money, they will steal your very soul, and will leave you only this world in which to take refuge.