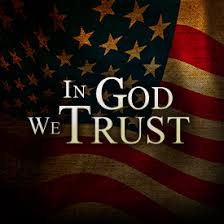 From the founding of this nation, and before, a generic form of God has been addressed and referred to without specifically pinpointing who this god is or binding him to the “Christian” God, or to Jesus Christ. It has always been politically expedient for our leaders to confine all mention of god to this generic representation of divinity; and this is even more pronounced today as this generic god rises more and more into the foreground of the American way of life.

The god of civil religion is most devoted to our adhering to its primary tenet, which is not faith or trust in the unseen, all-knowing, ever-present, all-powerful God and His promise to supply all of His children’s needs, but to its special form of allegiance which is patriotism. This allegiance to patriotism puts the capability of man’s destiny and provision squarely into his own hands and the hands of his elected leaders.

Our use of the word “god” is really irrelevant when used in our worship or in political speeches, and has only a ceremonial value geared to evoke a sentimental nod of approval. This religious “god” word, along with many other words, are principally served to pacify our unenlightened hearts before getting down to any really serious thoughts, or work, which Christianity has nothing at all to do with. A mocking soul may even observe that Americans have to mention god and patriotism, or risk being disliked, voted out of office, or overlooked for advancement. A semblance of piety and patriotism is the highest requirement of the American civil religion. Let all your religious speech be seasoned with patriotic poetry and you are sure to be recognized and acknowledged that god is on your side. To use the word “god” and “patriotism” in the same sentence is recognized as a certain sign of enduring faith in American civil religion.

Are we not always suspicious of the religious ritual of other’s religion and dismiss it as unimportant because it is only “ritual”? And, the things people say are not taken at face value because they are not made explicit in their day-to-day lives, but are only indicators of some vague religious sentiment. They all confess that religion has some good value; but they care so little about it that it has lost any value or content.

These are necessary concerns and worth the time to pursue answers, because they raise the question of how the civil religion of patriotism has replaced the genuine faith toward the living God of the Bible. We have embraced a false belief system propagated by men, who find it necessary to establish a welfare state of men trusting in men, and using the religion of civil patriotism to fuel the machinery of American Government, and securing its survival, with such things as the “just war,” and expressing its doctrines with beliefs, symbols, and rituals.

The whole of our existence in America can be understood with the false, unbiblical teaching of “Manifest Destiny” and the resulting tradition that it is the Christian’s obligation, individually and jointly, to take dominion of, not only North America, but the earth. The belief that America is God’s chosen land, the new Israel, and that Americans are God’s chosen people to accomplish His will is the sin of greed and pride, alive and well, in the human heart.

What we have from the earliest years of America is a complex collection of beliefs, symbols and rituals that are not distinctly Christian although it is called Christianity, with the pride of patriotism being its distinguishing feature.

Our pride and patriotism have blinded us to the truth. We have accepted carte blanche all the traditions passed down to us without ever questioning the obvious contradictions of our dogma to the simple truth of the Gospel. To even question the veracity of patriotism is to be labeled a heretic. No one would dare to openly dispute the idea of an American Christian pledging allegiance to the flag. But, this and many other things are the common practice of those practicing the civil religion of the American states, that is mistakenly called Christianity.

We need those who will prove beyond question the things they have been spoon fed for many years; what they will find is something totally different; but, it will be the truth. Your salvation depends on “truth” not flowery speeches or eloquent sermons, so seek the truth.

It is time, the hour is late, that the debate begin and stay alive, for the sake of the truth. The people of the United States of America have been sold a bill-of-goods concerning the truth of Scripture; it was began many hundreds of years ago, endorsed and expanded by the so called church fathers, bought into by the reformers, brought to America, cast in stone by the founding fathers, and elevated to the level of manifest destiny by the American people. The only problem is, it is a lie, and not to be found in the document described as its source, the Bible. The term “Ignorance is bliss” is no more true than it is at this late hour, when Paul, directed by the Holy Spirit, wrote,

“So God will cause them to be greatly deceived, and they will believe these lies.” 2 Thess. 2:11.

“Blessed is the one who does not condemn himself by what he approves.” Rom. 14:22.

2 replies on “The American Civil Religion”

Steve,
These are truly trying times of great deception, and yet, as you point out, the lie has been with us for centuries. Ever since Constantine made “Christianity” the State religion, it would be safe to say that the majority has been in the wrong about many things. I suspect that the “Titanic” of American Churchianity is too far gone to turn back now, and that the best we can do is help lost sheep find the life boats. Thanks for continuing to sound the alarm.
David

The Titanic is far into the final phase of sinking. My appeal is to incite a conflict of truths, and force those who feel the despair of a sinking faith to give a last desperate attempt to reach the safety of a lifeboat. I have been told that I am beating a dead horse; that may be but the battle is not over yet. If one more soul can be reached, then let the beating continue.

I hope all is well with you. It is always good to hear from friends.