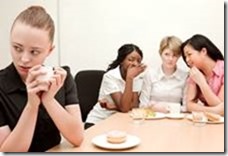 We own chickens on our little homestead in Whitestown Indiana, white ones

. We bought the hens as chicks and raised them all together as one happy family. As they matured the reds became bigger and more aggressive; eventually we had to separate them because they had blinded one of the smaller white ones. The order is always the same, the big against the little. The other day our roster

, we call him Larry, mercilessly attacked the blinded white and sent her banging into lawn chairs and walls finally to just give up and allow herself to be brutalized, and possibly killed if I hadn’t intervened. I imagined that those bigger chickens felt proud in their ability to dominate and control their weaker members, it’s an animal thing.

In the lower “animal” nature we see this played out as, well, natural, but what about the higher animal nature of humans, is this justified? Can we simply fall back on the excuse of a “base” animal nature when we witness the larger in our society taking advantage of the smaller and weaker

? To bully means, to intimidate, cow, bulldoze, or browbeat or even kill. We have all heard of the latest bullying episodes where the victim is actually killed or commits suicide, and we cringe at such a beastly and criminal behavior that derives pleasure from such acts.

At the core of all human beings lay this base nature to dominate the weaker, smaller, or younger of our race. But, also at our core is another nature, a nature that is appalled at the dominating attitude of the bully and sides with the weak and defenseless. It is a dual nature where we are constantly admonished to repress the lower nature. The human animal is unique in this regard, a battle that wages within us, and that nature which is fed rises to dominance; this is true on a personal as well as on a social level.

Once a bully experiences power and victory he or she begins to build up a resistance to any agitation they may receive from an awakened conscience of right and wrong and ultimately becomes calloused, and will even become offended when confronted. The worst kinds of bullies are those who openly applaud and celebrate their corrupt and dishonorable character. Who isn’t glad when these unsocial menaces are restrained and put in their place? There is a sense of peace when the small and weak are protected and allowed to flourish and become strong and healthy in mind, body, and spirit.

Who is weaker or smaller than a child, and weaker still, than the unborn child. Bullies feed on the weak, and with that element of our humanness, who have yet to be born, it is , “out of sight out of mind.” Bullies give no amount of thought to the harm they inflict on these  weak-ones; their very weakness is the justification given for their demise; they have become as nothing, and even less than nothing in the eyes of the bully.

We as a nation have become bullies toward those who cannot fight back, who have no voice, whose only crime against society is that they have not been born.

I hope this message will reach the ears of maybe only one person who will discern the inhuman cruelty of a society who sacrifices its young on the altar of modernity. On that society, there is most certainly a curse. I pity that society.

3 replies on “No One Likes a Bully”

The lofty arguments forwarded by american patriots in support of our military activities worldwide are willing to concede innocent human collotoral damage in the name of maintaining US dominance. This is bullying on a grand scale. God allowed a judgement on 9-11-2001 to come upon our country. Americas response was to build the “Freedom Tower” where the twin towers stood. The freedom america is willing to kill for is much different than the freedom God offers. Most are happy to propose that the two are one and the same.

America has a history defined by bullying. Modern US history dating back to the time of Christopher Colombus saw the exploitation and eventual decimation of the indigenous indian cultures of the Americas. Subsequently the importation of African slave laborer, regarded as livestock by European imperialists, created a sub culture defined by crime and poverty. The bullying of which you speak, abortion, was introduced to America by Margaret Sanger, in an effort to control the rate of birth among occupants of the lower economic class who were regarded as parasites. This group has evolved into a cash cow for those who sell death in the name of a woman’s “right to choose”. US military activity in Southeast Asia, South America and today on the African continent is responsible for the deaths of millions of innocent people. All of this killing is the result of greed defined as progress by the beast system ruling the fallen world in which we live. “The love of money is the root of all evil.”

I agree totally with this posting. Murdering defenseless children is always wrong. Ironically, I was called a bully by a Facebook “friend” when I challenged her about her pro-choice position. I countered back by saying that killing a pre-born child is far more bullying than I could ever do. For some reason, she never responded back.