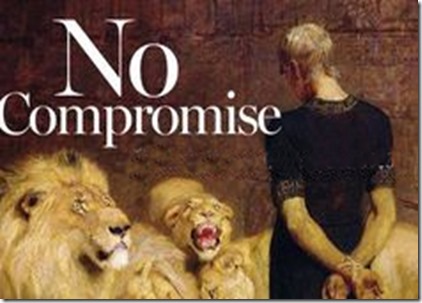 I have written extensively concerning Christian involvement in politics, at any level, and that the involvement in this process is forbidden to Christians. I find it very easy, personally, to understand the New Testament’s teaching in this regard, but for most Christians this understanding is not so apparent. Patriotism and its associated emotions run very deep in the United States, and as a consequence most Christians have intentionally blinded themselves to the obvious facts of the teachings of Jesus, the Apostles, and the primitive Church.

The last few days have given us a couple of good examples of why Christians should stay outside of the political workings of government. The first is the problematic position our Governor of Indiana now finds himself in with the SCOTUS passing of the gay marriage law. The other is the Marine who is battling the government on her right to post a Bible scripture verse in her cubicle.

Governor Pence, a Christian, is now put into a position of who he should serve, the State, or God; or is there a place for a Christian to compromise? Every Christian is put into this same position when they vote for the “lesser of two evils,” or pledge or swear allegiance to serve in the military and its duty to kill its enemy, or to a flag “. . . and to the Republic for which it stands . . . .” Has the Bible really given us the duty to force Christianity onto the world through the ballot box, legislation of Christian morals, or building up Christian armies? These ideas are completely foreign to the New Testament teachings of Jesus and the Apostles.

“Never has religious liberty been under greater attack in our nation’s military. Just how bad things are was demonstrated recently in the case of United States v. Sterling.”

“In that case, the United States Navy-Marine Corps Court of Criminal Appeals held that the Marines could order Lance Corporal Sterling to remove a Bible verse that Sterling had posted in her work station. Sterling, a devout Christian, posted Isaiah 54:17 (“no weapon formed against you shall prosper”) on very small pieces of paper in three places around her work station . . .”

This Lance Corporal intentionally joined herself to an institution of the world and now expects that “world” to honor her “rights” when she was directed by her God to not take an oath or serve another master. Now she will, with the help of another “Christian” organization sue in the courts (another worldly institution), of which she again is forbidden to do, make a mockery of her God and His Kingdom.

The only way I can explain this gross insubordination, in the face of easy to understand New Testament Scripture, is a lack of intention to really want to serve their professed Master. It is apparent that today’s Christians are being misguided by the pulpit and eagerly accept the easy believism as the truth of the Gospel.

I am not surprised that the world is making such great inroads into Christian circles when nowhere are the commands of Christ being obeyed. Christians today do not put their trust and faith in God, they put it in politics, armies, ballot boxes, pistols, knives, savings accounts, stocks, bonds, and all the other resources derived from eating from the tree of the knowledge of good and evil. This is not a matter of inability or ignorance; it is a matter of “intention.”

Christian leaders and their followers have no intention of following the Lord and deliberately see truth where there is no truth and a lie where Christ speaks plainly.

Let’s be honest, shall we? Where does your life differ from that of the world other than you call yourself a “Christian.”

One reply on “Military Courts and Bible Verses”

Steve,
Interesting observations about these two recent examples. It would seem that the trajectory of our country will soon force “Christians” to decide where their allegiances lie…
David