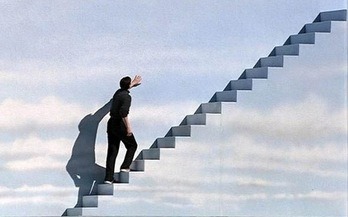 I was in the other half of the double that my aunt and uncle lived in on Keystone Avenue, in Indianapolis, and there was a doctor who lived there now. I climbed the back steps that led into the kitchen. I always thought that that side of the double was more attractive than the side that I lived and grew-up in with my mom and dad, brother and three sisters. When I entered the kitchen there was no one there but I noticed that all the walls had been stripped to the bare plaster except for some small areas where the old paper had not all come off yet. As I examined my surroundings, wondering what was going on, a young gentleman came out, about 35 years old, and I instinctive knew that he was a doctor, a surgeon of some sort. Very politely he said hello to me, as if I should know him, and I sensed that he was no ordinary doctor but special in some way. He said that he had just taken down a picture that hung over the stove and it must have been heavy because he was holding his back as if strained from leaning over the stove and lifting the picture off the wall. He had removed the picture so that the rest of the wall could be prepared for whatever he was getting ready to do, but it was obvious that everything had to be discarded and cast-out first.

In my mind, I wondered where my aunt and uncle were but did not find the answer, but felt that he had their approval and that it was not important. The doctor told me he was redoing the place where he was to live and that he wanted to show me five things that I had missed seeing during my years coming and going from visits with my aunt and uncle. We then proceeded down a staircase of which I had to duck beneath an overhang so I wouldn’t hit my head. Immediately we came to a corner about halfway down the stairway where he proceeded to show me the first of the five things I had missed. The first thing I noticed was that all of the accumulated wallpapering and paint had been removed to expose what was underneath and it amazed me. There he showed me some very intricately carved molding that edged the corner of the wall that went up to some crown molding along the ceiling that was likewise very artistically carved. I thought to myself that I had never ever noticed this before and that it was beautiful even though it had not yet been finished, stripped clean, just the bare wood showed. The doctor took my hand and made me touch the intricate design and to feel the smoothness and delicateness of its design and nature. All the roughness had been removed.

I was appalled and sickened at myself that I was not able to understand how I had missed ever seeing this before and thought that I could not notice it because I was not mentally prepared to see it or to do anything like what this talented person had done. I felt lazy and worthless. He had exposed a great hidden treasure that had been right in front of my eyes all along and that because of my state of mind was unable to see or that I even cared to see. Then I awoke.

As I lay there in bed, awake or asleep I am not quite sure, I pondered what I had just experienced and a revelation began to form in my mind. This gentle doctor was no man, He was God and He wanted me to understand something that I had missed all of my 69 years of life, and that is that God creates all things intricately as great treasures and that over many years of men treading-down the earth each successive generation has added to the accumulated covering that has hidden the truth of what He had originally intended.

My thoughts immediately went to the homeless, who wandered the streets totally ignorant of the fact that each of them was a precious and unique treasure created by this Doctor, that had allowed the debris of a lifetime to cover and hide, not only from the world but from their very self, the intricate design, and purpose He had for their lives.

Then I began to think about those who were close to me, about my wife, children, and grandchildren, and about myself. Each and every one was like that wood molding, precious in its design and purpose, intricately and precisely constructed, for a specific reason, but covered over with the debris of mindlessness and misunderstanding, and my mind went back to the homeless, alone, cold, sick, hungry, without hope.

Then I was fully awake, and afraid I would not remember what I had just received, so I hurriedly dressed and wrote down these words while still fresh in my mind, it was 4:00 AM, and I wondered what the other four things were that the Doctor wanted to show me and I felt miserable.

I then understood that I had not appreciated or discovered the hidden gift that lay hidden in each and every person and at what cost that discovery would require. I did start to see that my wife was greatly gifted with a sense of immense responsibility toward the lives of her family and that this sense or gift was given to her by the Doctor and that it needed to be nurtured and pruned to bear more fruit. I also saw that the lives of the homeless had been forgotten, that they were being given food and that many others were compelled to give money and physical support, but that they were not being given the bread of life from someone who shared in their suffering. I also was beginning to see that I could not just tell them about their hidden gift and uniqueness but that the gift must be revealed through sacrifice and selflessness, through being immersed in their world while, at the same time, staying separated from their world.

I understood that the Doctor was fully committed to a complete renewal of that old double into something glorious and unlike anything resembling its previous nature and that the debris was to be destroyed. That old double is where I have spent my life, never knowing the hidden value and preciousness buried under decades of garbage, never hearing the voice of the Doctor, the Surgeon, who renovates broken-down and humbled dwellings, who cuts away the bleeding and screaming flesh of everyone who will submit to His knife.

Separation and surgery come at a price and is not without pain and suffering. But, what is the price of a new Life? Christ endured the pain and suffering required to remove our debris and suffers still to see His finished operation, the Temple of His habitation.

Now, I will wait for four more things.