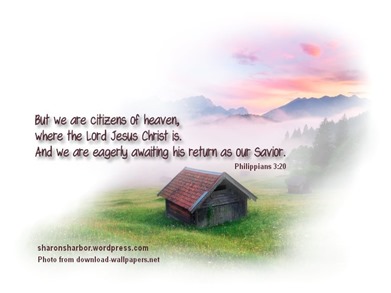 How many times do we do our devotional readings and go away not remembering a single thing about what was read? I have to admit that I have done that too many times, but I have also read Philippians slowly and consciously and still miss hidden treasures.

The Holy Spirit is the revealer of deep truth with the end result that we experience real love toward all men, even our enemies, which magnifies and glorifies God. Paul says in Philippians 1:9-11

“And this is my prayer: that your love may abound more and more in knowledge and depth of insight, so that you may be able to discern what is best and may be pure and blameless for the day of Christ, filled with the fruit of righteousness that comes through Jesus Christ—to the glory and praise of God.”

If we are believers then He Himself, through His Holy Spirit will reveal to us deep things, as Paul again says in Ephesians 1:17-19:

“I keep asking that the God of our Lord Jesus Christ, the glorious Father, may give you the Spirit of wisdom and revelation, so that you may know him better. I pray that the eyes of your heart may be enlightened in order that you may know the hope to which he has called you, the riches of his glorious inheritance in his holy people, and his incomparably great power for us who believe.”

Once I was enlightened to the doctrine of non-resistance to evil, nearly all of the difficult scriptures fell into place; the pieces of the puzzle came together into a beautiful pictures of joy and peace, with God and with man. I was not looking for confirmation to that doctrine, I had already accepted it, but what I wasn’t looking for presented itself like a flash of light. With the doctrine of non-resistance is attached another doctrine closely related to it, and that is the doctrine of non-involvement in the politics of this world. Politics and patriotism have nothing to do with Christianity at all, and Paul addresses the wrong spirit of many Christians in his letter to the Philippians.

“It is true that some preach Christ out of envy and rivalry, but others out of goodwill. The latter do so out of love . . . . The former preach Christ out of selfish ambition, not sincerely, . . . . But what does it matter? The important thing is that in every way, whether from false motives or true, Christ is preached. And because of this I rejoice.” Phil. 1:17-19

The selfish ambition of worldly Christians shows up no better than when it is an election year, and especially this year. Their desire to make a Heaven on earth overrides any desire to live out the desire of Christ. Christ asks, “Why do you call Me Lord and do not do the things I command;” and with complete knowledge of this Scripture they pretend that they are doing exactly what Christ commands when they fight, kill, judge, and demand an earthly ruler to govern them. Paul speaking to true believers in Phil. 1:27 says:

“Whatever happens, conduct yourselves in a manner worthy of the gospel of Christ. Then, whether I come and see you or only hear about you in my absence, I will know that you stand firm in the one Spirit, striving together as one for the faith of the gospel.”

Those who wrap themselves in the flag do not have faith in God, but attempt to take matters into their own hands, not trusting a God who they cannot see; and again they pretend that God is pleased with their actions. Paul attempts to add some clarity for those who will listen and explains that Christ, Phil. 2:6-8,

“Who, being in very nature God, did not consider equality with God something to be used to his own advantage; rather, He made himself nothing by taking the very nature of a servant, being made in human likeness. And being found in appearance as a man, He humbled himself by becoming obedient to death—even death on a cross!”

This doesn’t sound like someone concerned with self-defense, suing for redress, advocating for a strong military, or voting for a president! His only recourse when He found Himself as a “man” was to humble Himself and submit His life into the hands of His Father, regardless of the scene being played out on the stage of this life. But, Paul continues in his epistle of joy to castigate false believers when he says in Phil. 2:19-21:

“I hope in the Lord Jesus to send Timothy to you soon, that I also may be cheered when I receive news about you. I have no one else like him, who will show genuine concern for your welfare. For everyone looks out for their own interests, not those of Jesus Christ.”

Human nature is 180º out of sync with the truth and always seeks what is best, for its own skin. Selfishness and self-preservation is the mark of fallen mankind and the beast that lives within him. Paul is not speaking to pagans here, he is speaking to the Church. Any Christian who looks out for #1 is no Christian, he is a false believer and a slave to the evil one. Could this be the “mark of the beast,” “ the number of man” “666,” that distinguishing mark that separates believer from un-believer? The mark of selfishness.

Paul continues with his words of caution in the midst of his words of JOY. He ends Chapter 3 with this note of watchfulness, Phil. 3:17-21.

“Join together in following my example, brothers and sisters, and just as you have us as a model. . . . For, as I have often told you before and now tell you again even with tears, many live as enemies of the cross of Christ. Their destiny is destruction, their god is their stomach, and their glory is in their shame. Their mind is set on earthly things. But our citizenship is in heaven. And we eagerly await a Savior from there, the Lord Jesus Christ, who, by the power that enables him to bring everything under his control, will transform our lowly bodies so that they will be like his glorious body.”

Paul’s position was non-political and admonishes Christians to follow his example. Then he warns true believers that many so called believers are not believers at all, but rather he classifies them as enemies of the cross of Christ. Their lives are exemplified by holy talk and selfishness. Their actions support a life indistinguishable from those of the world. Their god is their own desires and their glory are those things of which they should be ashamed. Their minds are set on those things which can bring them the most comfort and safety and the preservation of their way of life. True believers know that they are wanders and strangers in this world and that they have no interest or regard for the institutions of this world; they have one citizenship ONLY and that is in Heaven, ruled by a powerful King who will at His appointed time bring everything under His control, with no election process. For all of those who believe this and have chosen to die to this world and its ruler, Satan, they will be rewarded with a transformation, a metamorphoses, from these lowly bodies of decaying flesh to glorious bodies that will never decay or die. All of this is based on the truth of the Christian religion, backed-up by miracles, prophecy, and the resurrection of the Lord Jesus Christ.

Unbeliever take notice, some day you will die, and forever regret your choice.

Pseudo-believer take notice, some day you too will die, and forever regret your choice.

3 replies on “Everywhere I Turn”

“Light has no fellowship with darkness”! are you “conformed to the ways of the world or transformed by the word of God”? “Separate and peculiar people.” he said “deny me before men I will deny you before God”.True martyrs for the faith asked themselves; “Do I slay this evil man who wants to kill me or allow him to take what is already protected by the blood? They answered; “Stand firm, your Glory is in heaven”. “Forgive them they don’t know what they are doing.”

I totally agree! Exactly! Yet so many are not willing to let go of these things and have a stranglehold on them. They don’t really adhere to what the bible teaches. I’m glad I’m not alone in this stand. I felt alone already back in the late 80’s when church life was all about being a devout Republican; electing the next rulers that would bring heaven on earth all while hating on the poor and loving the rich and powerful. It was all about war and the troops. And stepping right over the oppressed.
( :
Blessings!

Steve,
How divided organized Christianity over these issues… But those of true faith “desire a better country” (Heb. 11:13-16), for they know that they “have died and their life is hidden with Christ” (Col. 3:1-4).
David