A man can have a clear understand of what guilt and injustice are when it is presented to him in some immediate, stark, and vivid way, yet this same man remains completely ignorant and blind to a much greater guilt, and unconsciously contributes to its progress.

Humankind is appalled when we see pictures or videos of men making bets on animal fights. These hard, callous, and criminal people prepare their animals through breeding, conditioning, use of steroids and stimulants, attaching various kinds of killing devices, lacing the dogs coat with poison or paralyzing agents, and if they don’t perform well they kill them. In that dark world the saying is, “Breed the best and bury the rest.” 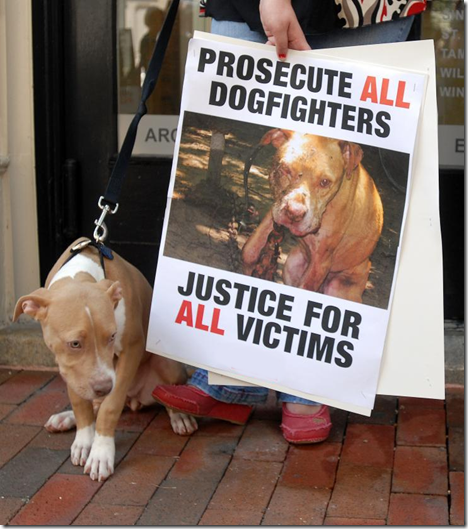 Since 2008, it has been a federal felony to sponsor, exhibit, buy, sell, deliver, possess, train or transport an animal for participation in an animal fighting venture. This crime is punishable by a term of imprisonment of five years and a fine of $250,000.  It is a felony to knowingly bring a child under the age of 16 to an animal fight and a misdemeanor to knowingly attend an animal fight.

Once the animal is prepared for battle and a quarrel instigated, the promoters sit back and watch the spectacle and take notes on how they can become more proficient in their deadly sport. The outsiders are horror-struck that such a thing can happen in their civil culture, and demand that the guilty be brought to justice.

Now, let’s look at that same experiment when it is tried with the human animal. How does the world differentiate it? They look on calmly, reasonably, with an open mind and pride.

Military leaders bring men together by the thousands, men who have no quarrel and would gladly live in peace. They drive them up together and set them in array, their front-line to our front-line, and having armed them with weapons of death, they incite and inflame them to induce unthinkable harm and suffering on those who might otherwise be loving friends and brothers. Through compulsion and the false love of a malicious art, military and political leaders transform gentle and harmless men, and whole societies, into instruments of vengeance and death, and not a conscience is found guilty anywhere.

Once first-blood flows then we are fully “engaged” and there is no problem after that, it is simply mayhem, kill or be killed; the work must go on – the work of an unutterable horror!

And what do men say to this? Only a few Christian prudes object, but the countless mainstream of society gather around the scene, as near as they can get to it by news, radio and television, history and firsthand reports, and venerate the systematic measures of elimination. They watch the progress and the maneuvers of the hostile armies as they would the changes of a game of chess. But when it comes to tormenting the minds of dogs or fighting cocks and maddening them against their fellow, Oh! That is disgusting brutality! That, they cannot bear!

Men of the world do horrendous things and Christians go along with them because they have been convinced of the justness and righteousness of the most horrendous of all, and by none other than those who have been commissioned to stand for Truth and Righteousness, our esteemed pastors and priest. Is this not the ultimate blind leading the blind?

How have we gotten from the clear and plain message of Jesus and His Apostles to a message that proclaims the exact opposite of what He taught? How has the message of Peace been transformed into a message of war? From Life to death? From Forgiveness to vengeance? From Love of enemies to “Just War”? and all without guilt. The conscience of Christendom has become callous. We are a people struck with fear and will not trust God for our protection; we are a faithless and hopeless people. We are a people in collusion with the world to protect us; and the world’s ways are the ways of its Prince, Satan, whose ways are the ways of fear, suffering, pain, imprisonment, laws, vengeance, guilt, slavery, and all the other devises used to enforce compliance. Christians are no different than the world; but some are beginning to wake up, but not many.

Wake-up Christians, time is running out, and there is much work to do; but first we must learn the message of Jesus to pick up our cross and not our guns. If we will be followers of Jesus then we must walk as He walked, and violence in any form is prohibited. That is the mystery of the Kingdom, overcoming evil with good. Let’s give it a try!

2 replies on “Collusion of Conscience”

Steve,
As you have pointed out so well many times before, it is pure folly for man to believe that he can please God by following the world’s ways. I only wish that I had seen this more clearly from the start.
David

As do we all. At 66 years old I feel I have wasted so many of those years tripping around in the fog. And, even now I catch myself sliding.

Thanks brother, The Lord bless you.