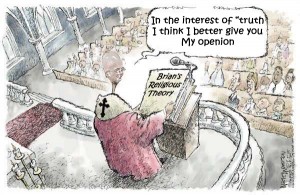 Being a Christian in today’s world is not a popular thing to be, at least if you are a Christian who loves Israel. There are those other “Christians” who test God with their hate speech, and align themselves with those worldlings who hate Israel. They can call themselves Christian if they want, it is still a free country. But, just because you call yourself a Christian doesn’t make it so. One of the signs of a false Christian (or at least a sign of ignorance) is their attitude towards God’s chosen people, the Israelites. Here are a few of the Scripture references Christians should think about when attacking Israel: Deut 30:1-6, 32:9,10; Jer 31:10, 12:14; Isa 11:11,12, 40:1,2; Zech 2:8.

Brian McLaren is so bold to indulge God’s patience and to presume upon His mercy as he maligns the “apple of His eye” Zech 2:8 “For thus saith the Lord of hosts: After the glory he hath sent me to the nations that have robbed you: for he that toucheth you, toucheth the apple of my eye:”

Brian praises Greg Barrett for stomping on Israel, and is then encouraged to write a series of supporting articles on the same subject, so stay tuned.

Greg Barrett tells the inconvenient truth … on Israel and Palestine

I’m working on an important series of posts on the subject … hopefully they’ll be ready to share in the next week or two.