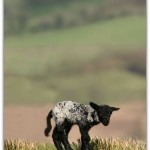 It just recently occurred to me through a comment by a sister on another blog. The sheep are shepherding themselves. To peruse the Christian blogosphere, by and large (there are some notable exceptions) the ones blowing the trumpet and warning the flock of danger are the uncredentialed, unordained but Holy Spirit- sensitized sheep. The big name shepherds who are tasked with leading, feeding and protecting the flock have gone silent in the face of a tsunami of false prophets, preaching false doctrine, declaring a false gospel, and filling “churches” with false converts. Meanwhile the “churches” are hemorrhaging the true church and filling with goats as the sheep wander from pasture to pasture seeking unpolluted fodder.

The credentialed, ordained official “pastors”invite the false prophets to their conferences.

They sell their books.

They promote their CDs.

They peddle the word of God for profit.

And even mix His holy word with the spiritual poison of the vain dreams of men.

And the sheep shepherd themselves.

God has much to say about this situation. A true pastor, shepherd, leader is not appointed by men. He is appointed by God. Men may recognize God’s call on another but they can’t grant it. Men may recognize the call; but usually they don’t. The true shepherd stands up for the sheep and stands up to the hireling. This tends to make hirelings very nervous. And it usually results in authentic shepherds being attacked while the wolves dine at ease. God has a word for the false shepherd:

( Jeremiah 23: 1ff) “Woe to the shepherds who destroy and scatter the sheep of My pasture!”, says Yahweh. Therefore thus says Yahweh, God of Israel, against the shepherds who feed my people: “You have scattered My flock, driven them away, and not attended to them. Behold, I will attend to you for the evil of your doings,” says Yahweh.

So as the flock are driven away (on purpose?) the shepherds feed themselves and the sheepshepherd themselves.

God continues, vs 14 ”I have seen a horrible thing in the prophets of Jerusalem: They commit adultery and walk in lies; they also strengthen the hands of evildoers, so that no one turns back from his wickedness.”

While the wicked and the corrupt and the polluted “prophets” are strengthened, the sheep shepherd themselves.

They speak vision from their own hearts vs 16 (What’s your vision brother?)

They steal words from one another vs 30

To the sheep who have had to shepherd themselves the Holy One of Israel says,

” I will gather the remnant and they will be fruitful and increase. vs 4 and

”I will set up shepherds over them who will feed them, and they shall fear no more, nor be dismayed nor shall they be lacking,” says Yahweh.

Let me stop being so diplomatic for a moment. Pastor; Your job is to speak. Speak to God on behalf of people and speak to people on behalf of God.  Therefore speak! Warn, teach, strengthen, protect, declare the counsels of the Living God. Rebuke the wolves. Challenge the hirelings. Alert the flock. If you will not open the word and declare the clear unequivocal authoritative oracles of God, get out of the ministry and get yourself a real job. You are hindering not helping and you are storing up judgement for your self. May God grant you repentance or removal.

To the sheep. God knows your plight. He knows your heart. He knows what is required and He will bring it to pass. The official shepherds may have treated you shamefully as they attempt to protect their patch but God will raise up shepherds who will lead you to green pastures and drive away the wolves. Who knows maybe you are one of the new shepherds.

To those who have swallowed the heretical lies and have decided to ”support the vision of the Pastor” or “not touch the LORD’s anointed” or have simply decided to “go along to get along”. Beware you are not found in the wrong paddock when Jesus divides His sheep from the goats.

Sheep are not designed to shepherd themselves but better no shepherd than to be entrusted to the wolves. Some of the shepherds in name only get harsh with sheep who will not submit to a slow spiritual death in their churches, but God will have His way. His sheep know His voice and will not follow a stranger but will flee from him (John 10:3-5)

Jesus is redrawing the boundaries of His church. The true sheep will follow Him into green pastures and will flock together. The state-owned, introspective, institutionally oriented religious clubs called churches by men are losing any right to be called churches by God but the Spirit- led, Christ honouring , bible believing disciples are finding each other as they are led by the Lord and He is raising up His shepherds to fulfil the tasks of a true shepherd to protect, lead and feed.

No longer will the sheep need to shepherd themselves.

“I will gather those who sorrow over the appointed assembly, who are among you, to whom its reproach is a burden. Behold at that time I will deal with all who afflict you. I will save the lame and gather those who were driven out”

Amen Lord, let it be so, for Christ’s sake.

One reply on “And the sheep shepherd themselves”

Well done brother! Well said and well written… I wept at the hope the Lord extends to His sheep…and the promise that the apostasy will indeed be judged… Thank you