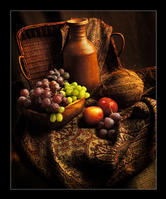 This week is Thanksgiving and many of us will come together and give thanks to our Lord for the blessings he has blessed us throughout the year.

I believe that, for most people, the “thank you “ part of Thanksgiving is the most boring part. It has been relegated to mere ritual, where the most religious person is given the task of “saying the blessing,” and of course, including the words “thank you.” Little thought is given to whom we are giving thanks, or why, it is just one more hurdle that has to be cleared so that the next stage can begin.

Thanksgiving, like so many other events and holidays, has lost its significance with the passage of time. The bounty that America has produced was originally attributed to the providence of God, but today you rarely hear the word. The idea that there really is someone providing the things we take for granted is becoming more and more fantastic and illogical. And, for those of us who still believe in Providence, our degree of true faith is inspiring fewer and fewer these days.

During this time of year I reflect that our country was founded and built upon the knowledge and fear of God and His Word.

“On April 10, 1606 King James I granted the first charter of Virginia to the Jamestown colonists.”

“The following is how the charter opened up, giving the instructions for the Virginia Colony…”

“We, greatly commending, and graciously accepting of, their Desires for the Furtherance of so noble a Work, which may, by the Providence of Almighty God, hereafter tend to the Glory of his Divine Majesty, in propagating of Christian Religion to such People, as yet live in Darkness and miserable Ignorance of the true Knowledge and Worship of God…”

There is a growing number in our nation today who reject the fact that this nation was founded on His prescripts given to us and discovered in the volume of His Word.

“Benjamin Franklin stated the following at the Constitutional Convention of 1787…”

“ God governs in the affairs of man. And if a sparrow cannot fall to the ground without his notice, is it probable that an empire can rise without His aid? We have been assured in the Sacred Writings that except the Lord build the house, they labor in vain that build it. I firmly believe this. I also believe that, without His concurring aid, we shall succeed in this political building no better than the builders of Babel”

Solomon wrote in Proverbs 16:7,
“When a man’s ways please the LORD, he makes even his enemies to be at peace with him.”

Today we are surrounded by enemies who have no fear of us, and again the question is, to whom are we giving thanks, and why?

“On reflecting where we are today, I present these words from the past, from Governor Samuel Johnston.”

“It is apprehended that Jews, Mahometans (Muslims), pagans, etc., may be elected to high offices under the government of the United States. Those who are Mahometans, or any others who are not professors of the Christian religion, can never be elected to the office of President or other high office, [unless] first the people of America lay aside the Christian religion altogether, it may happen. Should this unfortunately take place, the people will choose such men as think as they do themselves.”

“We are a nation founded upon the principals of God Almighty. It is His Word, the Bible that has helped govern the direction this nation would go. But fast forward to today, we no longer heed God’s Word.”

I give thanks that there still is a spark of liberty and love for The God of Heaven and our Lord and Savior Jesus Christ. There are a few of us still who uphold the principals upon which this nation was founded. We do not forget that this nation has been blessed by God and God alone. But, do we not see those blessings disappearing before our very eyes. Can we conclude that God is not pleased? Yes, that is the Biblical conclusion.

That spark of liberty may be the spark that ignites the furnace of adversity in which the spirit of grace and thankfulness is proven.

God is the God of all our provisions, and He alone knows what we need. One of the greatest things Jesus said, is when He claimed equality with the Father by saying, “Before Abraham was, I Am.” If He merely wanted to establish His pre-existence He could have said “before Abraham was, I was.” Jesus is taking great liberty with that statement, and in it we go back to that day when Moses talked with God in the burning bush, and asked what name he should give the God who was sending him to the children of Israel. God told him to tell them that “I Am” has sent you unto them. Without getting into a detailed examination of God’s many names it is easy to see that the name “I Am” is an incomplete sentence, it has no subject, why? Jehovah (I Am) purposely left that sentence incomplete so that we could fill it in with what ever need we happen to have at the time. Jesus was reminding these Jews of God’s ability to fill every need that could arise, and that He himself is the fulfillment of our deepest desires and needs. Do you need strength, I Am your strength. Do you need healing, I Am your healer. Do you need provisions, I Am your provider. I Am_____________, you fill in the blank. But, today we just don’t get it. Jesus is still everything we need if we can unravel the riddle.